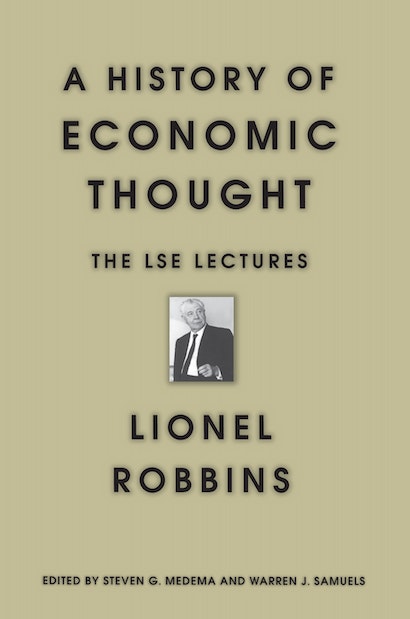 Lionel Robbins’s now famous lectures on the history of economic thought comprise one of the greatest accounts since World War II of the evolution of economic ideas. This volume represents the first time those lectures have been published.


Lord Robbins (1898-1984) was a remarkably accomplished thinker, writer, and public figure. He made important contributions to economic theory, methodology, and policy analysis, directed the economic section of Winston Churchill’s War Cabinet, and served as chairman of the Financial Times. As a historian of economic ideas, he ranks with Joseph Schumpeter and Jacob Viner as one of the foremost scholars of the century. These lectures, delivered at the London School of Economics between 1979 and 1981 and tape-recorded by Robbins’s grandson, display his mastery of the intellectual history of economics, his infectious enthusiasm for the subject, and his eloquence and incisive wit. They cover a broad chronological range, beginning with Plato, Aristotle, and Aquinas, focusing extensively on Adam Smith, Thomas Malthus and the classicals, and finishing with a discussion of moderns and marginalists from Marx to Alfred Marshall. Robbins takes a varied and inclusive approach to intellectual history. As he says in his first lecture: “I shall go my own sweet way — sometimes talk about doctrine, sometimes talk about persons, sometimes talk about periods.” The lectures are united by Robbins’s conviction that it is impossible to understand adequately contemporary institutions and social sciences without understanding the ideas behind their development.


Authoritative yet accessible, combining the immediacy of the spoken word with Robbins’s exceptional talent for clear, well-organized exposition, this volume will be welcomed by anyone interested in the intellectual origins of the modern world.

Lionel Robbins taught at the London School of Economics from 1929 to 1961, directed the economic section of the British War Cabinet during World War II, and served as Chairman of the Financial Times from 1961 until 1970. His best known work is An Essay on the Nature and Significance of Economic Science. He became a life peer in 1959 and a Companion of Honour in 1968. Steven G. Medema is Professor of Economics at the University of Colorado at Denver. He is the editor of the Journal of the History of Economic Thought, author of Ronald H. Coase, and the coauthor, with Nicholas Mercuro, of Economics and the Law (Princeton). Warren J. Samuels is Professor of Economics at Michigan State University. He is the author of The Classical Theory of Economic Policy and The Economy as a Process of Valuation and coedits Research in the History of Economic Thought and Methodology with Jeff E. Biddle.

"Everything about this book breathes affection: Lionel Robbins's concern for his students down the decades, the editors' sensitive treatment of their subject, and Professor William Baumol's modest justification for his foreward: 'I was there!'"—Arthur Seldon, Times Literary Supplement

"For anyone who has taught a course in the history of economic thought or who has more than a passing interest in the field, this book will be a delight."—Choice

"As the 20th century draws to a close, the history of economic thought is beginning to look different, and the publication of Lionel Robbins's London School of Economics lectures on the subject will contribute to this process of rethinking. . . . A welcome relief from the ponderousness of many volumes on this subject."—Virginia Quarterly Review

"The book . . . is filled with insights. . . . The editors, in order to retain to the fullest the inimitable flavor of Robbins' personality, have wisely not tidied up the text. . . . [They] deserve high praise for making these fine lectures available."—Mises Review

"With a profound sense of humor and highly engaging anecdotes, this master teacher provided an unusual opportunity to discover not only the ideas but also the very different frames of reference that inspired the contributions of these great minds to our present understanding of economics. Essential reading."—Library Journal

"These lectures reflect Robbins' two personae—the scholarly exponent of the centuries of economic thought and the passionate advocate of classical liberalism. A decisive part of his intellectual armoury was his often elegant, classical spoken English, which evoked a mixture of awe and wonder. In his LSE lectures, which he may have felt were his last epistles to posterity, the language is more informal, sometimes, colloquial, even unfamiliarly conversational."—Arthur Seldon, Times Literary Supplement

"Anyone reading these lectures can, and surely will, admire their style, the range of material they cover, the dazzling intellectual brilliance, and the stimulation they provide."—From the foreword by William J. Baumol, New York University