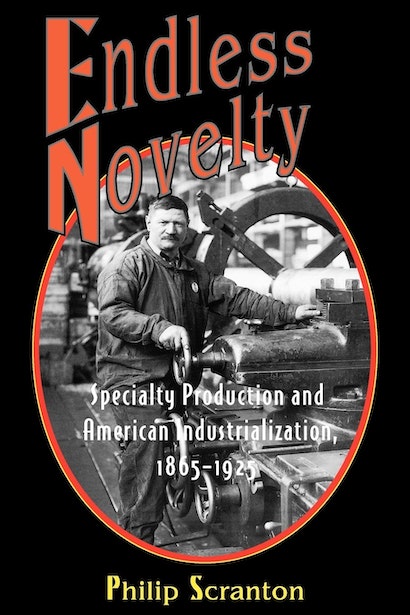 Flexibility, specialization, and niche marketing are buzzwords in the business literature these days, yet few realize that it was these elements that helped the United States first emerge as a global manufacturing leader between the Civil War and World War I. The huge mass production-based businesses — steel, oil, and autos — have long been given sole credit for this emergence. In Endless Novelty, Philip Scranton boldly recasts the history of this vital episode in the development of American business, known as the nation’s second industrial revolution, by considering the crucial impact of trades featuring specialty, not standardized, production. Scranton takes us on a grand tour through American specialty firms and districts, where, for example, we meet printers and jewelry makers in New York and Providence, furniture builders in Grand Rapids, and tool specialists in Cincinnati. Throughout he highlights the benevolent as well as the strained relationships between workers and proprietors, the lively interactions among entrepreneurs and city leaders, and the personal achievements of industrial engineers like Frederic W. Taylor.


Scranton shows that in sectors producing goods such as furniture, jewelry, machine tools, and electrical equipment, firms made goods to order or in batches, and industrial districts and networks flourished, creating millions of jobs. These enterprises relied on flexibility, skilled labor, close interactions with clients, suppliers, and rivals, and opportunistic pricing to generate profit streams. They built interfirm alliances to manage markets and fashioned specialized institutions — trade schools, industrial banks, labor bureaus, and sales consortia. In creating regional synergies and economies of scope and diversity, the approaches of these industrial firms represent the inverse of mass production.


Challenging views of company organization that have come to dominate the business world in the United States, Endless Novelty will appeal to historians, business leaders, and to anyone curious about the structure of American industry.

Philip Scranton is University Board of Governors Professor, History of Industry and Technology, at Rutgers University in Camden. His most recent book is Figured Tapestry: Markets, Production, and Power in Philadelphia Textiles, 1885-1941.

"This carefully researched, theoretically informed, and imaginatively structured book will command a broad readership. . . . This volume presents a coherent and compelling alternative to the studies of managerial capitalism and big business that have dominated business history."—Thomas J. Misa, American Historical Review

"In contrast to . . . stories of mass production, Scranton's Endless Novelty develops a more nuanced and ultimately more convincing account of the second industrial revolution. . . . [This is a] compact and meticulously researched study."—David E. Nye, Nature

"Endless Novelty's most provocative challenge to economic orthodoxy . . . is its thesis that price competition is not the best route for business to follow. Much of the book can be seen as a brief against the exhalation of price reductions over other business advantages. . . . Ultimately, Endless Novelty is a valuable reminder that a humane workplace can and should exist."—James Surowiecki, Lingua Franca

"By subverting the deterministic narrative of mass production, Scranton has helped to make the story of the American economy safe for diversity once again."—Kenneth Lipartito, Technology and Culture

"A tremendously important book, one that attempts to redirect the thrust of scholarship in the area of business and economic history."—John N. Ingham, University of Toronto