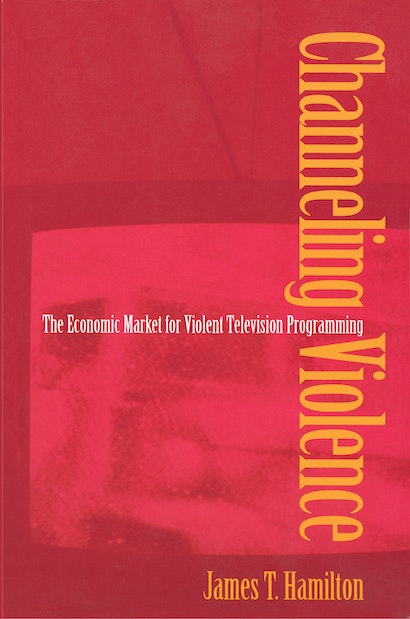 “If it bleeds, it leads.” The phrase captures television news directors’ famed preference for opening newscasts with the most violent stories they can find. And what is true for news is often true for entertainment programming, where violence is used as a product to attract both viewers and sponsors. In this book, James Hamilton presents the first major theoretical and empirical examination of the market for television violence.


Hamilton approaches television violence in the same way that other economists approach the problem of pollution: that is, as an example of market failure. He argues that television violence, like pollution, generates negative externalities, defined as costs borne by others than those involved in the production activity. Broadcasters seeking to attract viewers may not fully bear the costs to society of their violent programming, if those costs include such factors as increased levels of aggression and crime in society. Hamilton goes on to say that the comparison to pollution remains relevant when considering how to deal with the problem. Approaches devised to control violent programming, such as restricting it to certain times and rating programs according to the violence they contain, have parallels in zoning and education policies designed to protect the environment.


Hamilton examines in detail the microstructure of incentives that operate at every level of television broadcasting, from programming and advertising to viewer behavior, so that remedies can be devised to reduce violent programming without restricting broadcasters’ right to compete.

"This well-written and finely argued analysis begins by noting what we all-too-often take for granted: TV programming is in general profit driven, and, in particular, is strategically chosen to attract particular viewing audiences. . . . Hamilton, effectively and adroitly, makes the analogy to air pollution in that in both cases producers do not consider the full societal and cultural costs of their activities."—Journalism and Mass Communication Quarterly

"Drawing on economic theory and a wealth of empirical evidence, in addition to his previous complementary professional research on pollution control, Hamilton . . . contributes significantly to the literature on television violence and the individual and societal stake in it. . . . The book offers a wealth of data. . . . Recommended."—Choice

"A comprehensive and convincing demonstration that marketing mayhem is, like environmental pollution, a market failure with far-reaching consequences."—George Gerbner, Dean Emeritus, The Annenberg School for Communication, University of Pennsylvania