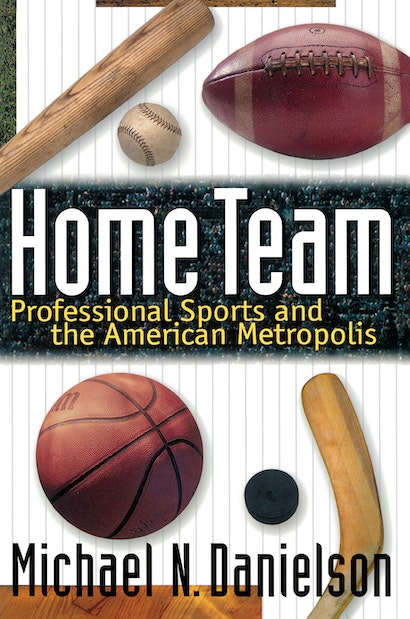 Most books that study professional sports concentrate on teams and leagues. In contrast, Home Team studies the connections between professional team sports in North America and the places where teams play. It examines the relationships between the four major professional team sports — baseball, basketball, football, and hockey — and the cities that attach their names, their hearts, and their increasing amount of tax dollars to big league teams. From the names on their uniforms to the loyalties of their fans, teams are tied to the places in which they play. Nonetheless, teams, like other urban businesses, are affected by changes in their environments — like the flight of their customers to suburbs and changes in local political climates. In Home Team, professional sports are scrutinized in the larger context of the metropolitan areas that surround and support them.


Michael Danielson is particularly interested in the political aspects of the connections between professional sports teams and cities. He points out that local and state governments are now major players in the competition for franchises, providing increasingly lavish publicly funded facilities for what are, in fact, private business ventures. As a result, professional sports enterprises, which have insisted that private leagues rather than public laws be the proper means of regulating games, have become powerful political players, seeking additional benefits from government, often playing off one city against another. The wide variety of governmental responses reflects the enormous diversity of urban and state politics in the United States and in the Canadian cities and provinces that host professional teams.

Home Team collects a vast amount of data, much of it difficult to find elsewhere, including information on the relocation of franchises, expansion teams, new leagues, stadium development, and the political influence of the rich cast of characters involved in the ongoing contests over where teams will play and who will pay. Everyone who is interested in the present condition and future prospects of professional sports will be captivated by this informative and provocative new book.

Michael N. Danielson is B. C. Forbes Professor of Public Affairs and Professor of Politics and Public Affairs at Princeton University, where he directs the Center of Domestic and Comparative Policy Studies. He is the author of The Politics of Exclusion and Profits and Politics in Paradise: The Development of Hilton Head Island.

"It will be the authority on the subject for a long time coming."—Frank Deford, Newsweek

"In America, a professional sports team tends to play a big part in the emotional life of its host city; it nearly broke New York's heart when the city's beloved Brooklyn Dodgers threw it over for L.A. Michael Danielson knows all about home-team loyalty; growing up in Brooklyn in the '50s, the Dodgers were his first love. In this book, he combines that personal interest with a professional one in urban politics."—Washington Post Book World

"Danielson examines every side of the business of sport, from ceilings on player salaries to leases on grounds, to cable TV rights. . . . [His] account . . . could not be more timely or relevant."—Albert Scardino, New Statesman

"Danielson has ingested an enormous amount of information and come up with some interesting observations."—Allen Barra, Chicago Tribune

"The author's analysis is first-rate. Experts and general readers will learn quite a bit from this book."—Steven Riess, author of City Games: The Evolution of American Urban Society and the Rise of Sports

"Danielson brings to this book a life-long interest in sports as a dedicated fan. Drawing upon insights from economics, political science, and urban studies, as well as popular sports literature and business history, the author provides an account that will inform and entertain all readers interested in the phenomenon of professional teams."—James Quirk, author of Pay Dirt: The Business of Professional Team Sports.