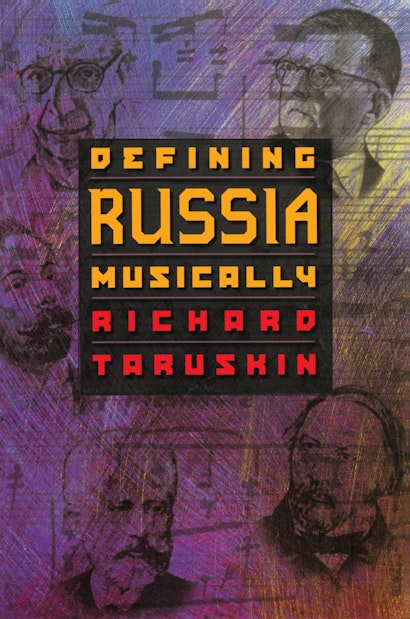 The world-renowned musicologist Richard Taruskin devoted much of his career to helping listeners appreciate Russian and Soviet music in new and sometimes controversial ways. Defining Russia Musically represents one of his landmark achievements: here Taruskin uses music, together with history and politics, to illustrate the many ways in which Russian national identity has been constructed, both from within Russia and from the Western perspective. He contends that it is through music that the powerful myth of Russia’s “national character” can best be understood. Russian art music, like Russia itself, Taruskin writes, has “always [been] tinged or tainted … with an air of alterity—sensed, exploited, bemoaned, reveled in, traded on, and defended against both from within and from without.” The author’s goal is to explore this assumption of otherness in an all-encompassing work that re-creates the cultural contexts of the folksong anthologies of the 1700s, the operas, symphonies, and ballets of the 1800s, the modernist masterpieces of the 1900s, and the hugely fraught but ambiguous products of the Soviet period.

Taruskin begins by showing how enlightened aristocrats, reactionary romantics, and the theorists and victims of totalitarianism have variously fashioned their vision of Russian society in musical terms. He then examines how Russia as a whole shaped its identity in contrast to an “East” during the age of its imperialist expansion, and in contrast to two different musical “Wests,” Germany and Italy, during the formative years of its national consciousness. The final section focuses on four individual composers, each characterized both as a self-consciously Russian creator and as a European, and each placed in perspective within a revealing hermeneutic scheme. In the culminating chapters—Chaikovsky and the Human, Scriabin and the Superhuman, Stravinsky and the Subhuman, and Shostakovich and the Inhuman—Taruskin offers especially thought-provoking insights, for example, on Chaikovsky’s status as the “last great eighteenth-century composer” and on Stravinsky’s espousal of formalism as a reactionary, literally counterrevolutionary move.

Richard Taruskin (1945–2022) was professor emeritus of music at the University of California, Berkeley, and a regular contributor to the New Republic, the New York Times, the New York Review of Books, and Opera News. His books include Musorgsky: Eight Essays and an Epilogue (Princeton), Opera and Drama in Russia, and Stravinsky and the Russian Traditions.

"A passionate vision of what Russian music has meant both as an expression and as a shaping force of the country's character. . . . [Taruskin is] an exceptionally gifted critic. . . . The connections between technique and expression are formidably argued, and it is the capacity to do this, with patience and depth of understanding and with a vast knowledge of the literature, that gives Taruskin's criticism its quality."—John Warrack, Time Literary Supplement

"Taruskin's work is far too rich and multi-layered, steeped in Russian intellectual history, literature, and culture, even to synopsize in a short review. . . . His newest book is essential for musicologists wishing to understand Russia's place in music, and for Slavists wishing to understand music's place in Russia."—Robert W. Oldani, Russian Review

"More than a musicologist, Richard Taruskin is a cultural critic who deserves non-scholarly readers. His brilliant and alarmingly timely book Defining Russia Musically is about the battle for a nation's soul—fought between Europe and Asia, modernity and primitivism—in the music of Tchaikovsky and Shostakovich."—Peter Conrad, The Observer

"Taruskin's hallmarks are evident throughout: research of almost astonishing breadth, impatience with facile views and those who propound them, and contempt for formalist modes of analysis that ignore the extramusical. This is an important, challenging book; no other book in English covers this ground with equal depth or brilliance."—Choice

"When this controversial book first appeared in hardback, it sparked a debate . . . both because of and despite the way it tore into big names in the musicological world. Now it seems like a landmark. . . . Richard Taruskin raises important questions about how cultural and artistic judgements are made."—Literary Review

"Richard Taruskin has again demonstrated that anything he writes leads to serious thinking and reevaluation of hitherto held views. His erudition and mastery of the field as well as his ability to see beyond the surface the implications not easily grasped by a non-Russian make this work required reading for anyone seeking a full understanding of music in Russia."—Miloš Velimirović, Professor Emeritus, University of Virginia

"It is most unusual for a top-ranking scholar to write both broad and deep, for the general public and for a specialized circle, in a field as technically demanding as music. In this new book, Taruskin continues to remake the map of Russian music by focusing on the Russians' experience with 'outsideness.' On the border between East and West, Russian culture has always been better at absorption and transformation than at isolation and exclusion. With its implicit hope that Westerners might become responsible, informed 'others' to the Russian tradition, Taruskin's study covers several centuries of this generous eclecticism so that it reads like a Russian novel. It is a spectacular and timely project."—Caryl Emerson, Princeton University