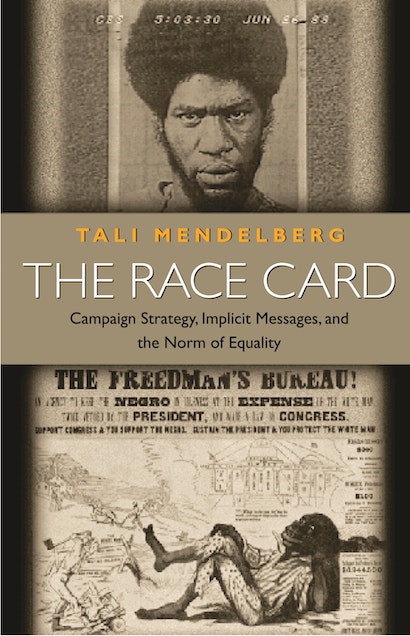 Did George Bush’s use of the Willie Horton story during the1988 presidential campaign communicate most effectively when no one noticed its racial meaning? Do politicians routinely evoke racial stereotypes, fears, and resentments without voters’ awareness? This controversial, rigorously researched book argues that they do. Tali Mendelberg examines how and when politicians play the race card and then manage to plausibly deny doing so.


In the age of equality, politicians cannot prime race with impunity due to a norm of racial equality that prohibits racist speech. Yet incentives to appeal to white voters remain strong. As a result, politicians often resort to more subtle uses of race to win elections. Mendelberg documents the development of this implicit communication across time and measures its impact on society. Drawing on a wide variety of research — including simulated television news experiments, national surveys, a comprehensive content analysis of campaign coverage, and historical inquiry — she analyzes the causes, dynamics, and consequences of racially loaded political communication. She also identifies similarities and differences among communication about race, gender, and sexual orientation in the United States and between communication about race in the United States and ethnicity in Europe, thereby contributing to a more general theory of politics.


Mendelberg’s conclusion is that politicians — including many current state governors — continue to play the race card, using terms like “welfare” and “crime” to manipulate white voters’ sentiments without overtly violating egalitarian norms. But she offers some good news: implicitly racial messages lose their appeal, even among their target audience, when their content is exposed.

Tali Mendelberg is Associate Professor of Politics at Princeton University.

"In this excellent study, Tali Mendelberg develops an original argument about the use of implicit racial appeals in political campaigns. She creatively deploys a variety of methods and offers important insights in whites' racial thinking and particularly into the ways modern politicians play upon anti-black racial prejudice and antagonism while retaining respectability. . . . The book is an important contribution to political psychology: a case study in one critical realm of politics (interracial or ethnic relations) of how affect and cognition interact with political culture, processes, incentives, and institutions to shape political behavior at both the elite and mass levels. Unusually for a study so thoroughly grounded in social science methods, the book also treats and links its arguments to the history of U.S. race relations, adding to its value."—Robert Entman, Political Psychology

"[G]roundbreaking on a number of levels and deserves attention from students of race, mass media effects, campaigns, elite behavior, and public opinion. . . It should be praised for the sheer volume of empirical evidence it presents and for the high risk of disconfirmation this poses for its central thesis. It should be read not only by those interested in the historical and contemporary role of racial appeals in modern American campaigns, but also by those seeking a model for rigorous, multimethodological, empirical social science research."—Nicholas Valentino, Public Opinion Quarterly

"Mendelberg uses historical and experimental surveys and concludes that implicit communication about race is far more prevalent today among dominant groups and far more deadly because it is less visible than the overt racism of the 1960s. Mendelberg's book is a must read. She combines normative and quantitative analysis with self-reflection."—Choice

"This book attempts something new and innovative within political science but it does so through a careful deployment of theoretical and methodological procedures acceptable to political scientists."—Andy R. Brown, Ethnic and Racial Studies

"In The Race Card, Tali Mendelberg develops a comprehensive theory of the use of implicit racial messages in election campaigns and the relative effectiveness of these messages with voters. . . . Mendelberg takes this thesis and rigorously tests it at each level of analysis. . . . [Her] work is impressive. She has grounded a comprehensive theory of implicit racial messages in the literature on public opinion, the social psychology of prejudice, and the racial character of American political parties. She provides compelling evidence from a variety of sources: experiments, analysis of survey data, and content analysis. . . . Her conclusions make a significant contribution to our understanding of how racial messages work in election campaigns. Her findings will contribute to sociologists working in the fields of race and ethnicity, mass media, and political sociology."—Matthew Schneirov, Contemporary Sociology

"The Race Card offers a methodologically rich and convincing account of the impact of subtle race cues in contemporary American politics. Although her thesis is a controversial one, Mendelberg develops a careful and cogent argument that racial attitudes can have a substantial effect on candidate evaluations—provided that candidates craft a racial appeal that appears to be about something other than race. . . . The author deserves considerable credit for the ingenuity and care that went into her experimental designs. . . . Virtually no one in this subfield has gone to greater lengths to ensure that a study occurred under the most realistic conditions possible. . . . Mendelberg's book should be regarded as a major contribution to the field of race and politics. Although Mendelberg's thesis will undoubtedly be regarded as controversial in some circles, her book goes a long way in providing compelling evidence that race, and racial attitudes, still matter in contemporary American politics."—Vince Hutchings, American Political Science Review

"By almost any definition this is a readable book. . . . Mendelberg has made a substantive contribution to our understanding of the political and cultural implications for a nation whose majority cannot seem to find a model other than white or black."—Kenneth O'Reilly, Journal of Southern History

"The author uses a wonderful variety of empirical data to track the evolution of political rhetoric about race from the Civil War to the present. This book has the potential to be a pioneering volume, moving beyond other accounts of how race influences mass politics in the contemporary era."—David O. Sears, University of California, Los Angeles

"This is an absolutely wonderful book—a fascinating, well-written account of the author's path-breaking research. It is controversial but convincing and will be of interest to a wide audience. . . . The book will surely make an important mark in political science, communications, and African-American studies. By all rights it should also shape the way the news media cover politics and—as a consequence—the way political campaigns are conducted. The work is both deeply rooted in well-developed research traditions and thoroughly new in what is has to offer."—Martin Gilens, Yale University