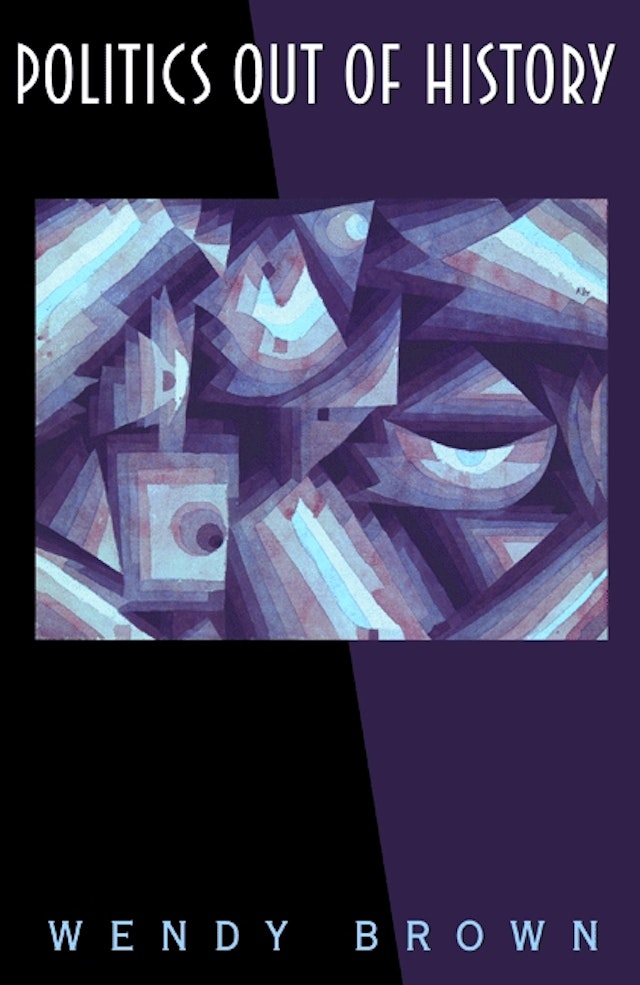 What happens to left and liberal political orientations when faith in progress is broken, when both the sovereign individual and sovereign states seem tenuous, when desire seems as likely to seek punishment as freedom, when all political conviction is revealed as contingent and subjective? Politics Out of History is animated by the question of how we navigate the contemporary political landscape when the traditional compass points of modernity have all but disappeared. Wendy Brown diagnoses a range of contemporary political tendencies — from moralistic high-handedness to low-lying political despair in politics, from the difficulty of formulating political alternatives to reproaches against theory in intellectual life — as the consequence of this disorientation.

Politics Out of History also presents a provocative argument for a new approach to thinking about history — one that forsakes the idea that history has a purpose and treats it instead as a way of illuminating openings in the present by, for example, identifying the haunting and constraining effects of past injustices unresolved. Brown also argues for a revitalized relationship between intellectual and political life, one that cultivates the autonomy of each while promoting their interlocutory potential. This book will be essential reading for all who find the trajectories of contemporary liberal democracies bewildering and are willing to engage readings of a range of thinkers — Freud, Marx, Nietzsche, Spinoza, Benjamin, Derrida — to rethink democratic possibility in our time.

Wendy Brown is Professor of Political Science and Women's Studies at the University of California, Berkeley. Her books include States of Injury: Power and Freedom in Late Modernity (Princeton), Manhood and Politics: A Feminist Reading in Political Theory, and Left Legalism/Left Critique, coedited with Janet Halley.

"Politics Out of History speaks in illuminating ways to distinctive features of contemporary experience. Wendy Brown's work commands widespread attention and respect, and there has been considerable interest as to how it would develop after States of Injury. This book will not disappoint."—William Connolly, The Johns Hopkins University, author of Why I Am Not a Secularist

"Brown shows enormous skill in interpreting difficult texts, sounding them to their depths, and eliciting from them some of their most subtle meanings. Her book is steadily absorbing, and provides a genuine contribution to political theory."—George Kateb, Princeton University