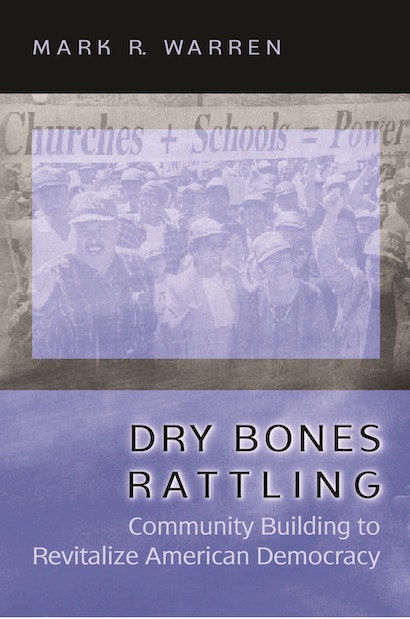 Dry Bones Rattling offers the first in-depth treatment of how to rebuild the social capital of America’s communities while promoting racially inclusive, democratic participation. The Industrial Areas Foundation (IAF) network in Texas and the Southwest is gaining national attention as a model for reviving democratic life in the inner city — and beyond. This richly drawn study shows how the IAF network works with religious congregations and other community-based institutions to cultivate the participation and leadership of Americans most left out of our elite-centered politics. Interfaith leaders from poor communities of color collaborate with those from more affluent communities to build organizations with the power to construct affordable housing, create job-training programs, improve schools, expand public services, and increase neighborhood safety.


In clear and accessible prose, Mark Warren argues that the key to revitalizing democracy lies in connecting politics to community institutions and the values that sustain them. By doing so, the IAF network builds an organized, multiracial constituency with the power to advance desperately needed social policies. While Americans are most aware of the religious right, Warren documents the growth of progressive faith-based politics in America. He offers a realistic yet hopeful account of how this rising trend can transform the lives of people in our most troubled neighborhoods. Drawing upon six years of original fieldwork, Dry Bones Rattling proposes new answers to the problems of American democracy, community life, race relations, and the urban crisis.

Mark R. Warren is Associate Professor in the School of Education at Harvard University.

"Warren has produced something unusual in democratic theory: a masterful combination of theory and observation that is original, readable, and important. It deserves a spot on the shelf of every student of democracy."—Choice

"Warren has done . . . a great service with his careful fieldwork, ample documentation and nicely written reporting . . . A fine introduction to what I , like Warren, believe to be an extremely important and promising social movement."—Mary Jo Bane, America

"Dry Bones Rattling stands as an important contribution to the ongoing conversation about the future of American civil society. All the big issues are here. . . . This is a timely book."—Mitchell L. Stevens, Social Forces

"An excellent political ethnography that offers an engaging analysis of how to build social capital, forge multiracial cooperation, and, above all, revitalize democratic participation and civic engagement in American society. . . . It provides us with a critical understanding as well as a tangible example of the elements that are needed to bring about a more inclusive and viable vision of civic engagement and revitalized democracy in a racially and ethnically diverse American society in the twenty-first century."—Yvette M. Alex-Assensoh, Journal of Politics

"Mark Warren's comprehensive case study of the Industrial Areas Foundation is a major contribution to the growing literature on coalition politics. Indeed, it is the best empirical study ever written on multiracial collaboration to address social inequality. Featuring careful and systematic analysis of rich data on local organizing, Dry Bones Rattling will be ancinfluential book and is must reading for those committed to revitalizing American democracy through interracial political cooperation."—William Julius Wilson, Harvard University

"Dry Bones Rattling is timely, important, and inspiring. Timely, because this study of the most successful faith-based movement for social justice in America appears just as faith-based social initiatives have reached the top of the national political agenda. Important, because it is a deeply grounded contribution to the rapidly growing field of social capital theory. Inspiring, because by showing how civic malaise has been reversed in some of the nation's most impoverished, ethnically divided settings, this book should raise the aspirations of democratic reformers. Must reading for social theorists and civic activists."—Robert Putnam, Harvard University, author of Making Democracy Work

"Mark Warren has written a comprehensive and insightful analysis of a profoundly important community-based movement. I have seen how the Industrial Areas Foundation organizations this book examines have revitalized communities across America, both physically and spiritually. In San Antonio, the city I know best, I watched Communities Organized for Public Service empower poor neighborhoods and give voice to their concerns. Capable new leaders emerged and the city entered a new era of citizen democracy. Dry Bones Rattling provides a compelling eyewitness account of the transformations these organizations bring, showing us a sacred force rooted in human dignity at work."—Henry Cisneros, Chairman and CEO of American CityVista

"Original scholarship built on strong ethnographic work, Warren's book is among the best of the outstanding scholarship on the dilemmas of American democracy that has emerged in recent years. As such it will be highly useful to specialists on grassroots movements and on the intersection of religion and politics in American life, as well as broadly useful to political scientists and political sociologists. This is excellent scholarly work on an important political phenomenon that until now has eluded adequate scholarly attention."—Richard L. Wood, University of New Mexico, author of Faith in Action