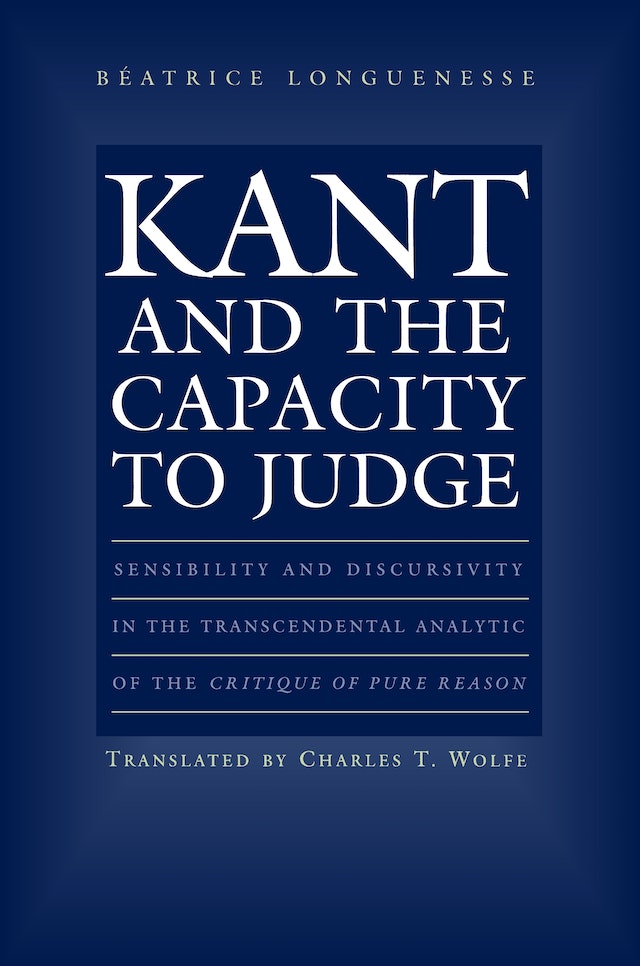 Kant claims to have established his table of categories or “pure concepts of the understanding” according to the “guiding thread” provided by logical forms of judgment. By drawing extensively on Kant’s logical writings, Béatrice Longuenesse analyzes this controversial claim, and then follows the thread through its continuation in the transcendental deduction of the categories, the transcendental schemata, and the principles of pure understanding. The result is a systematic, persuasive new interpretation of the Critique of Pure Reason.

Longuenesse shows that although Kant adopts his inventory of the forms of judgment from logic textbooks of his time, he is nevertheless original in selecting just those forms he holds to be indispensable to our ability to relate representations to objects. Kant gives formal representation to this relation between conceptual thought and its objects by introducing the term “x” into his analysis of logical forms to stand for the object that is “thought under” the concepts that are combined in judgment. This “x” plays no role in Kant’s forms of logical inference, but instead plays a role in clarifying the relation between logical forms (forms of concept subordination) and combinations (“syntheses”) of perceptual data, necessary for empirical cognition.

Considering Kant’s logical forms of judgment thus helps illuminate crucial aspects of the Transcendental Analytic as a whole, while revealing the systematic unity between Kant’s theory of judgment in the first Critique and his analysis of “merely reflective” (aesthetic and teleological) judgments in the third Critique.

Béatrice Longuenesse is Professor of Philosophy at Princeton University. Her other books include Hegel et la critique de la métaphysique.

"Béatrice Longuenesse's new book is a thorough reconsideration of Kant's first Critique, animated by Kant's greatest philosophical ambitions and informed by the best erudition, superior philosophical intelligence, and close textual fidelity. Kant and the Capacity to Judge will prove to be an important and influential event in Kant studies and in philosophy."—Robert B. Pippin, University of Chicago

"Longuenesse develops points that few commentators have developed, and she does this in a very convincing and detailed way."—Richard E. Aquila, University of Tennessee