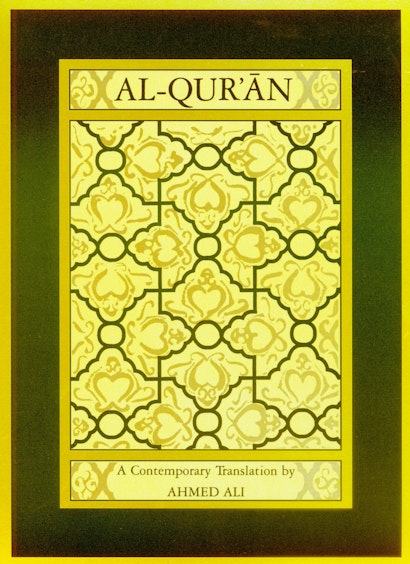 This bilingual edition of the Qur’an, the Holy Book of Islam, was first published in the United States in 1988. Ahmed Ali, the distinguished Pakistani novelist, poet, critic, and diplomat, presents this elegant and poetic translation in a contemporary and living voice. On each page, the original Arabic and the translated English sit side by side, encouraging the reader to draw from both texts. Professor Ali also includes notes where necessary, providing the full meaning of each word and phrase. This accessible volume is truly essential for both scholars and followers of Islam.

Ahmed Ali (1910-1994), a pioneer of the modern Urdu short story and cofounder of the All-India Progressive Writer's Movement and Association, taught at leading Indian universities and was a visiting professor in China and the United States. He published numerous works of fiction and nonfiction, including the widely acclaimed translations of classical Urdu poetry, The Golden Tradition. His novels include the classic Twilight in Delhi.

"In one of the most popular English versions of the Qur'ān, Ahmed Ali has succeeded in bringing all of the subtlety, depth, and spiritual power of Islam into his translation of this peerless scripture. Without distorting the English, Ali, a highly regarded author in his own right, renders the poetry of the original Arabic into lines of elegance and rhythm. . . . For the curious, the convert, or the devout, Ahmed Ali's Al-Qur'ān will bring all readers closer to the glory of God."—Brian Bruya, Amazon.com

"This translation of the Qur'ān aims at doing something new—it seeks to bring out the original rhythms of the Quranic language and the cadences. It also departs from traditional translations in that it gives more refined and differentiated shades of important concepts."—Fazlur Rahman, University of Chicago

"Ahmed Ali's work is clear, direct, and elegant—a combination of stylistic virtues almost never found in translations of the Qur'ān. His is the best I have read."—F. E. Peters, New York University