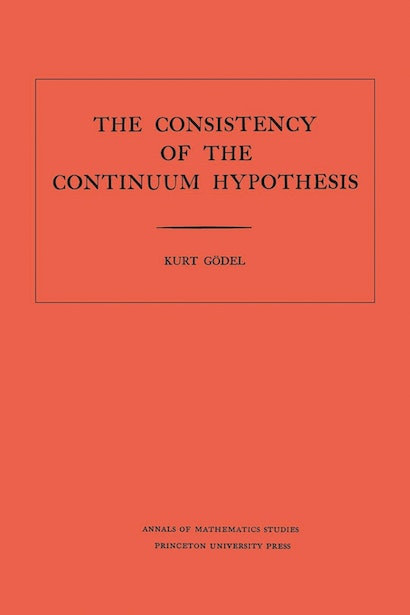 Kurt Gödel, mathematician and logician, was one of the most influential thinkers of the twentieth century. Gödel fled Nazi Germany, fearing for his Jewish wife and fed up with Nazi interference in the affairs of the mathematics institute at the University of Göttingen. In 1933 he settled at the Institute for Advanced Study in Princeton, where he joined the group of world-famous mathematicians who made up its original faculty.


His 1940 book, better known by its short title, The Consistency of the Continuum Hypothesis, is a classic of modern mathematics. The continuum hypothesis, introduced by mathematician George Cantor in 1877, states that there is no set of numbers between the integers and real numbers. It was later included as the first of mathematician David Hilbert’s twenty-three unsolved math problems, famously delivered as a manifesto to the field of mathematics at the International Congress of Mathematicians in Paris in 1900. In The Consistency of the Continuum Hypothesis Gödel set forth his proof for this problem.


In 1999, Time magazine ranked him higher than fellow scientists Edwin Hubble, Enrico Fermi, John Maynard Keynes, James Watson, Francis Crick, and Jonas Salk. He is most renowned for his proof in 1931 of the ‘incompleteness theorem,’ in which he demonstrated that there are problems that cannot be solved by any set of rules or procedures. His proof wrought fruitful havoc in mathematics, logic, and beyond.