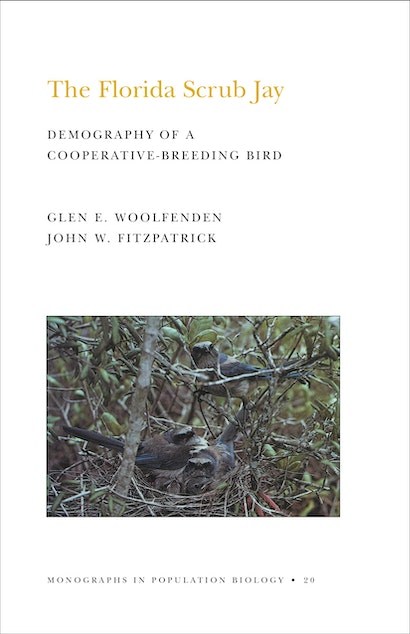 Florida Scrub Jays are an excellent example of a cooperative-breeding species, in which adult birds often help raise offspring not their own. For more than a decade Glen E. Woolfenden and John W. Fitzpatrick studied a marked population of these birds in an attempt to establish a demographic base for understanding the phenomenon of “helping at the nest.” By studying both population biology and behavior, the authors found that habitat restraints, rather than kin selection, are the main source of the behavior of Florida Scrub Jays: the goal of increasing the number of close relatives other than descendants in future generations is of relatively minor importance in their cooperative-breeding behavior.


The Florida Scrub Jay lives only in the Florida oak scrub. All acceptable habitat is constantly filled with breeders. Each year about half of the pairs are assisted by one to several nonbreeding helpers. This book provides extensive data on fecundity, survivorship, relatedness, and dispersal to establish the demographic milieu and to address questions arising out of observed helping behavior — whom, how, when, and why the helpers help.

Glen E. Woolfenden (1930-2007) was taught zoology at the University of South Florida, Tampa from 1961 to 1999. John W. Fitzpatrick is director of the Cornell Laboratory of Ornithology.

"[W]e have here a major contribution to populational and behavioral ecology, important for all students of the evolution of social behavior in vertebrates, whatever its form."—Frank A. Pitelka, Ecology

"This is an important contribution to population biology. It will be of interest not only to workers in the field, but also as a readable introduction to one of the central topics in ornithology today. For the general naturalist . . . it's a well-written, thoughtful account of a fascinating subject."—Clive E. Goodwin, Canadian Field Naturalist