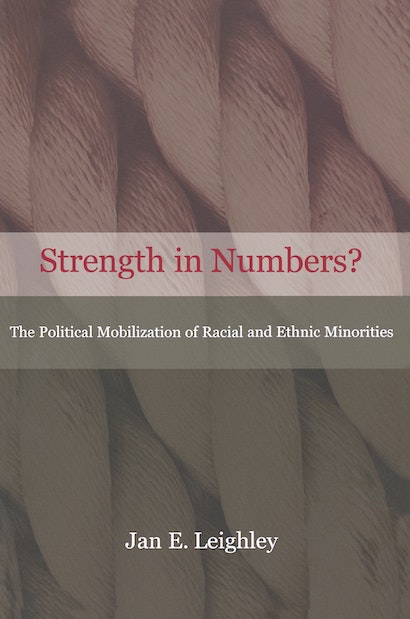 America’s increasing racial and ethnic diversity is viewed by some as an opportunity to challenge and so reinforce the country’s social fabric; by others, as a portent of alarming disunity. While everyone agrees that this diversity is markedly influencing political dynamics not only nationally but often on the state and local levels, we know little about how racial and ethnic groups organize and participate in politics or how political elites try to mobilize them. This book tells us. By integrating class-based factors with racial and ethnic factors, Jan Leighley shows what motivates African-Americans, Latinos, and Anglos to mobilize and participate in politics. Drawing on national survey data and on interviews with party and elected officials in Texas, she develops a nuanced understanding of how class, race, and ethnicity act as individual and contextual influences on elite mobilization and mass participation.


Leighley examines whether the diverse theoretical approaches generally used to explain individual participation in politics are supported for the groups under consideration. She concludes that the political and social context influences racial and ethnic minorities’ decisions to participate, but that different features of those environments are important for different groups. Race and ethnicity structure participation more than previous research suggests. Casting new light on an issue at the crux of contemporary American politics, Strength in Numbers? will be welcomed by scholars and students of political science, African-American and Latino studies, urban politics, and social movements.

Jan E. Leighley is Professor of Political Science at Texas A&M University. She has written extensively on mass political behavior in the United States in leading political science journals.

"Strength in Numbers is an informative analysis that will influence future comparative work on the political participation of minority and ethnic groups of the United States. . . . This book is an important step toward unraveling how participation and mobilization differ among African-Americans, Latinos, and Anglos."—Fredrick C. Harris, Journal of Politics

"Strength in Numbers takes an important step toward building a more comprehensive theory of minority political behavior, offering a new and more comprehensive, methodologically more rigorous, portrait than other such studies."—Louis DeSipio, University of Illinois at Urbana-Champaign