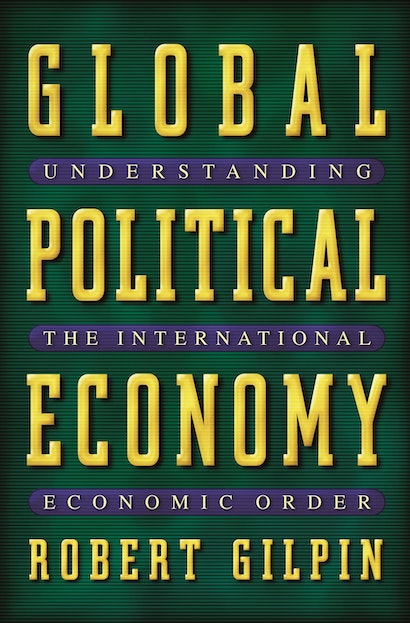 This book is the eagerly awaited successor to Robert Gilpin’s 1987 The Political Economy of International Relations, the classic statement of the field of international political economy that continues to command the attention of students, researchers, and policymakers. The world economy and political system have changed dramatically since the 1987 book was published. The end of the Cold War has unleashed new economic and political forces, and new regionalisms have emerged. Computing power is increasingly an impetus to the world economy, and technological developments have changed and are changing almost every aspect of contemporary economic affairs. Gilpin’s Global Political Economy considers each of these developments. Reflecting a lifetime of scholarship, it offers a masterful survey of the approaches that have been used to understand international economic relations and the problems faced in the new economy.


Gilpin focuses on the powerful economic, political, and technological forces that have transformed the world. He gives particular attention to economic globalization, its real and alleged implications for economic affairs, and the degree to which its nature, extent, and significance have been exaggerated and misunderstood. Moreover, he demonstrates that national policies and domestic economies remain the most critical determinants of economic affairs. The book also stresses the importance of economic regionalism, multinational corporations, and financial upheavals.


Gilpin integrates economic and political analysis in his discussion of “global political economy.” He employs the conventional theory of international trade, insights from the theory of industrial organization, and endogenous growth theory. In addition, ideas from political science, history, and other disciplines are employed to enrich understanding of the new international economic order. This wide-ranging book is destined to become a landmark in the field.

Robert Gilpin is the Eisenhower Professor of Public and International Affairs Emeritus at Princeton University. He is the author of many books, including The Political Economy of International Relations and The Challenge of Global Capitalism: The World Economy in the Twenty-First Century (both Princeton).

"An extremely well written, lucid, and persuasive analysis of international economic developments and their political implications and results, solidly grounded in history."—Arthur I Cyr, Orbis

"[A] scholarly, theoretical framework for examining how markets and the policies of nation-states determine the way the world economy functions."—Booklist

"Global Political Economy promises to be another classic and a much-consulted addition to academic library bookshelves."—Choice

"Robert Gilpin has written an important book. . . . Although he eschews polemics and writes in a low-key, analytical style, his forceful points serve as a needed antidote to Thomas Friedman's The Lexus and the Olive Tree and other facile works about the subject."—Christopher Layne, The Atlantic Monthly

"In this magisterial study Gilpin. . . shows he is second to none in his capacity to integrate political with economic analysis, and illuminate our understanding of the world political economy with historical and theoretical insights, devoid of the jargon that characterizes much contemporary IPE literature. . . . Gilpin's is an authoritative, but modest voice of common sense."—Martin Rhodes, International Journal of Financial Economics

"Robert Gilpin, the dean of American students of international political economy, has provided us with a masterful guide to the state of the world economy and how it can be explained. Current developments are placed in historical and theoretical perspective. In a book that is deeply thought as well as deeply researched and carefully argued, Gilpin has produced a landmark study."—Robert Jervis, Columbia University

"Global Political Economy undertakes a comprehensive survey of major aspects of the world political economy from the perspective of a leading 'realist' political scientist. Robert Gilpin emphasizes the continuing importance of the state and the great impact of variations in state structure and policy around the world. His book is an impressive attempt to synthesize economic and political analysis to understand the forces affecting globalization, state policy, and the results of their interaction for economic development and international trade, investment, and finance."—Robert O. Keohane, Duke University