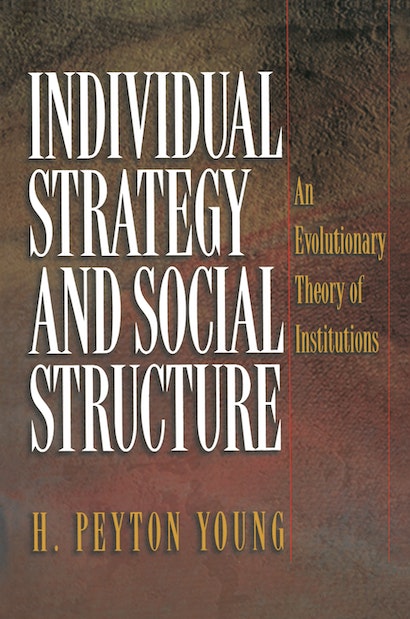 Neoclassical economics as-sumes that people are highly rational and can reason their way through even the most complex economic problems. In Individual Strategy and Social Structure, Peyton Young argues for a more realistic view in which people have a limited understanding of their environment, are sometimes short-sighted, and occasionally act in perverse ways. He shows how the cumulative experiences of many such individuals coalesce over time into customs, norms, and institutions that govern economic and social life. He develops a theory that predicts how such institutions evolve and characterizes their welfare properties.


The ideas are illustrated through a variety of examples, including patterns of residential segregation, rules of the road, claims on property, forms of economic contracts, and norms of equity. The book relies on new results in evolutionary game theory and stochastic dynamical systems theory, many of them originated by the author. It can serve as an introductory text, or be read on its own as a contribution to the study of economic and social institutions.

H. Peyton Young is Scott and Barbara Black Professor of Economics at The Johns Hopkins University and Codirector of the Center
on Social and Economic Dynamics at the Brookings Institution. He is the author of Equity: In Theory and Practice (Princeton).

"[Individual Strategy and Social Structure] should be a valuable resource for all interested in this extremely valuable and flexible technique. Self-contained and pleasant to read."—Journal of Economics

"Peyton Young's study puts the evolution of institutions on the basis of individual choices in an adaptive and adapting environment. It puts a firm foundation under the vague idea of 'spontaneous order.' The exposition is extraordinarily clear; Young introduces and explains the mathematical tools he uses in his brilliant synthesis and development, which combines ideas from evolutionary theory and the study of learning. The book is accessible to the beginner in the field and yet no one, no matter how expert, will fail to learn something."—Kenneth J. Arrow, Stanford University, 1972 Nobel Laureate in Economics

"Individual Strategy and Social Structure makes a convincing case for an adaptive, low-rationality, probabilistic approach to game theory and to economics and social science in general."—Alvin E. Roth, Harvard University

"In this well written and elegant volume, Peyton Young takes a large step in redirecting the theory and the problems that game theorists deal with. Rather than asking what is the proper equilibrium notion for a game played by fully rational agents capable of making all necessary calculations, he asks what types of conventions of behavior or social institutions will intelligent but not omniscient agents create for themselves when they repeatedly face the same problem that needs to be solved. Clearly this is what the real world looks like and Young brings us closer to it."—Andrew Schotter, New York University