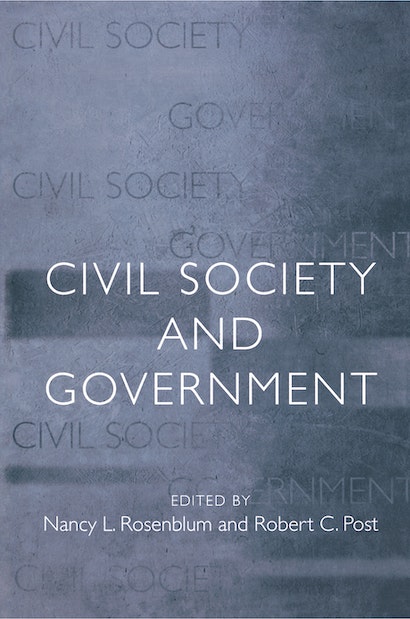 Civil Society and Government brings together an unprecedented array of political, ethical, and religious perspectives to shed light on the complex and much-debated relationship between civil society and the state. Some argue that civil society is a bulwark against government; others see it as an indispensable support for government. Civil society has been portrayed both as a independent of the state and as dependent upon it. This book reveals the extraordinary diversity of views on the subject by examining how civil society has been treated in classical liberalism, liberal egalitarianism, critical theory, feminism, natural law, Christianity, Judaism, Islam, and Confucianism.


The volume draws on the work of eminent scholars to address six questions: In terms of function and consequences, does it matter where the line is drawn between civil society and the state? What is the relationship of civil society to the state? In what contexts and under what conditions should government interact with individuals directly or instead indirectly through communal associations? What are the prerogatives and duties of citizenship, and what is the role of civil society in forming good citizens? How should a society handle the conflicts that sometimes arise between the demands of citizenship and those of membership in the non-governmental associations of civil society?

Nancy L. Rosenblum is Professor of Government at Harvard University. She is the author of Membership and Morals (Princeton), Another Liberalism, and editor of Obligations of Citizenship and Demands of Faith (Princeton). Robert C. Post is Alexander F. and May T. Morrison Professor of Law at the University of California, Berkeley. He is the author of Constitutional Domains and editor or coeditor of several other books.

"The writing is crisp, the research and argumentation uniformly good."—Choice

"Overall, there is nothing like this book that I know of. The contributors approach the question of the nature and place of civil society from within the most important contextual understandings of the major philosophical, ethical, and religious positions available in the world. This is a book that brings together material from an unusually wide range of perspectives on an important topic. The scholarship is first-rate—one profits from reading the footnotes as well as the text."—Tracy Strong, University of California, San Diego

"The conversation about civil society is important and exciting, but remains marked by a high level of noise and a low level of coherence. This volume shows that the many disagreements over defining the concept of civil society are not simply explanatory—maybe not even mostly explanatory—but normative and ideological in nature. These essays begin to translate the terms of these perspectives into the language of civil society, a key preliminary to understanding the contours of the conversation. In so doing, the volume provides an important contribution to an increasingly rich conversation."—Mark E. Warren, Georgetown University