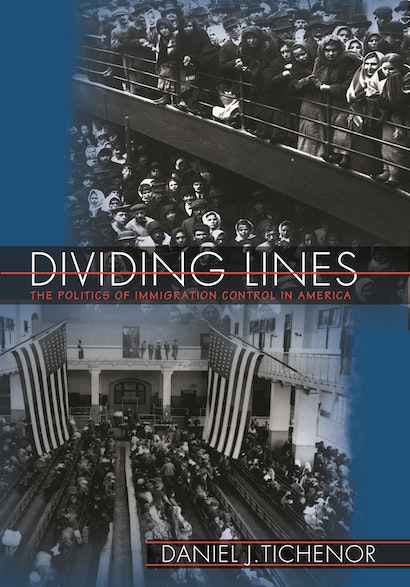 Immigration is perhaps the most enduring and elemental leitmotif of America. This book is the most powerful study to date of the politics and policies it has inspired, from the founders’ earliest efforts to shape American identity to today’s revealing struggles over Third World immigration, noncitizen rights, and illegal aliens. Weaving a robust new theoretical approach into a sweeping history, Daniel Tichenor ties together previous studies’ idiosyncratic explanations for particular, pivotal twists and turns of immigration policy. He tells the story of lively political battles between immigration defenders and doubters over time and of the transformative policy regimes they built.


Tichenor takes us from vibrant nineteenth-century politics that propelled expansive European admissions and Chinese exclusion to the draconian restrictions that had taken hold by the 1920s, including racist quotas that later hampered the rescue of Jews from the Holocaust. American global leadership and interest group politics in the decades after World War II, he argues, led to a surprising expansion of immigration opportunities. In the 1990s, a surge of restrictionist fervor spurred the political mobilization of recent immigrants. Richly documented, this pathbreaking work shows that a small number of interlocking temporal processes, not least changing institutional opportunities and constraints, underlie the turning tides of immigration sentiments and policy regimes. Complementing a dynamic narrative with a host of helpful tables and timelines, Dividing Lines is the definitive treatment of a phenomenon that has profoundly shaped the character of American nationhood.

Daniel J. Tichenor is Assistant Professor of Political Science at Rutgers University. He has published extensively in leading journals on immigration policy.

"Daniel Tichenor's Dividing Lines is one of the best books on U.S. immigration policy to appear in the past decade. Political scientists, sociologists, historians, and nonacademic readers will all find it illuminating."—Martin Shefter, Cornell University

"This is an excellent book. It constitutes a superb narrative history of American immigration policy and reform, makes sense of the trajectory of this development, and connects the politics and history of immigration reform to a set of larger theoretical claims in the field of American political development. It thus makes a number of important contributions, not only to immigration history but also to American political development and the historical-institutional study of politics generally."—Robert C. Lieberman, Columbia University