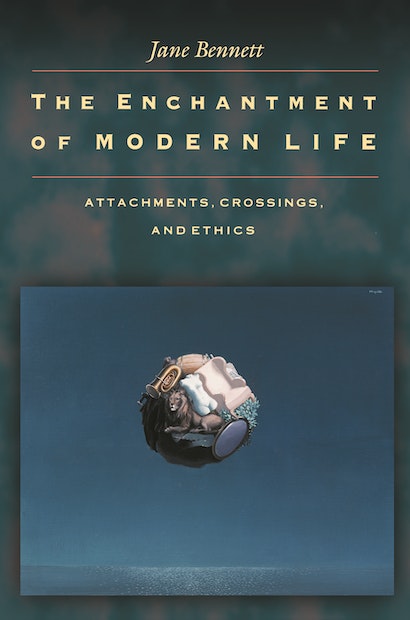 It is a commonplace that the modern world cannot be experienced as enchanted — that the very concept of enchantment belongs to past ages of superstition. Jane Bennett challenges that view. She seeks to rehabilitate enchantment, showing not only how it is still possible to experience genuine wonder, but how such experience is crucial to motivating ethical behavior. A creative blend of political theory, philosophy, and literary studies, this book is a powerful and innovative contribution to an emerging interdisciplinary conversation about the deep connections between ethics, aesthetics, and politics.


As Bennett describes it, enchantment is a sense of openness to the unusual, the captivating, and the disturbing in everyday life. She guides us through a wide and often surprising range of sources of enchantment, showing that we can still find enchantment in nature, for example, but also in such unexpected places as modern technology, advertising, and even bureaucracy. She then explains how everyday moments of enchantment can be cultivated to build an ethics of generosity, stimulating the emotional energy and honing the perceptual refinement necessary to follow moral codes. Throughout, Bennett draws on thinkers and writers as diverse as Kant, Schiller, Thoreau, Kafka, Marx, Weber, Adorno, and Deleuze. With its range and daring, The Enchantment of Modern Life is a provocative challenge to the centuries-old ”narrative of disenchantment,” one that presents a new ”alter-tale” that discloses our profound attachment to the human and nonhuman world.

"The very best feature of The Enchantment of Modern Life is the way it performs its own thesis: it is an enchanting, wonderful, and generous book that edifies and elevates the reader."—Moira Gatens, University of Sydney

"This book is a delight to read. Bennett has a remarkable talent for both being imaginative and yet not letting the enchantment of this flight lead her to fail in the task of carefully engaging those with whom she disagrees. She is enacting her own ideal of generosity while forging a powerful and original vision of late modern life. The core strength of this book lies in the way it draws the reader to entertain a distinctively different way of experiencing the world. No small achievement."—Stephen K. White, Virginia Tech, and Editor of Political Theory

"Bennett can do what others have not yet been able to do because she goes to the heart of the matter, to the foundation of those who claim to be foundationless, namely, to our underlying presumptions about the character of the material universe. She is a wonderful writer; her prose is crisp and clear, full of startling and enchanting formulations. The general effect of her book is to induce in us moments of enchantment, the ethical significance of which Bennett makes clear: she endeavors to attach us to the world, to bring forth our love for life, so that we are inspired to exercise greater care toward humanity and the material universe in which we live."—Melissa Orlie, University of Illinois at Urbana-Champaign

"The Enchantment of Modern Life has something very rare in an academic work: a mission. Even rarer, its sense of mission comes at no one's expense. The project is at once scholarly and ethical, seamlessly, integrally. This is not just another treatment of modernity. It is an exemplar, offering a gentle cure—a modernity of wonder—to the critical-cynical detachment that has been the hallmark of the humanities theorist for too long."—Brian Massumi, State University of New York at Albany