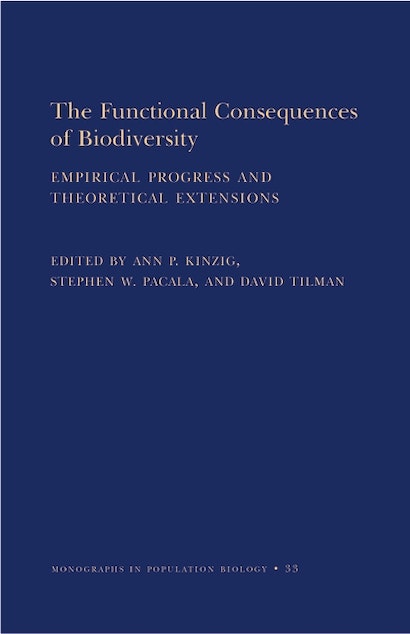 Does biodiversity influence how ecosystems function? Might diversity loss affect the ability of ecosystems to deliver services of benefit to humankind? Ecosystems provide food, fuel, fiber, and drinkable water, regulate local and regional climate, and recycle needed nutrients, among other things. An ecosyste’s ability to sustain functioning may depend on the number of species residing in the ecosystem — its biological diversity — but this has been a controversial hypothesis. There are many unanswered questions about how and why changes in biodiversity could alter ecosystem functioning. This volume, written by top researchers, synthesizes empirical studies on the relationship between biodiversity and ecosystem functioning and extends that knowledge using a novel and coordinated set of models and theoretical approaches.


These experimental and theoretical analyses demonstrate that functioning usually increases with biodiversity, but also reveals when and under what circumstances other relationships between biodiversity and ecosystem functioning might occur. It also accounts for apparent changes in diversity-functioning relationships that emerge over time in disturbed ecosystems, thereby addressing a major controversy in the field. The volume concludes with a blueprint for moving beyond small-scale studies to regional ones — a move of enormous significance for policy and conservation but one that will entail tackling some of the most fundamental challenges in ecology.

"An exciting, timely, and unique book by a powerful team of authors. No other text competes with it. It will be the standard reference on the relationship between biodiversity and ecosystem functioning for the next five, even ten years."—John H. Lawton, Chief Executive, Natural Environment Research Council, United Kingdom

"This book, written by superb authors, fills a major need in that it unites a discussion of pioneering research on the role of biodiversity in ecosystem function and relates these experiments to a common theoretical framework. The idea of bringing to bear a standardized and commonly accepted ecosystem function model on the biodiversity question is ingenious and of great value."—Peter Kareiva, Lead Scientist, The Nature Conservancy

"This exceptionally well-edited book summarizes, successfully, our current knowledge on the ecosystem functioning of biodiversity. It does much more, however: through the clever use of a standard model to explore various aspects of the issue, it greatly extends our understanding. The authors, who are all at the top of their fields, provide a wonderfully creative and useful analysis that goes a long way to explaining the true nature of the controversy that has plagued the field in the past couple of years. The Functional Consequences of Biodiversity provides a well-marked path for future work."—Harold Mooney, Stanford University