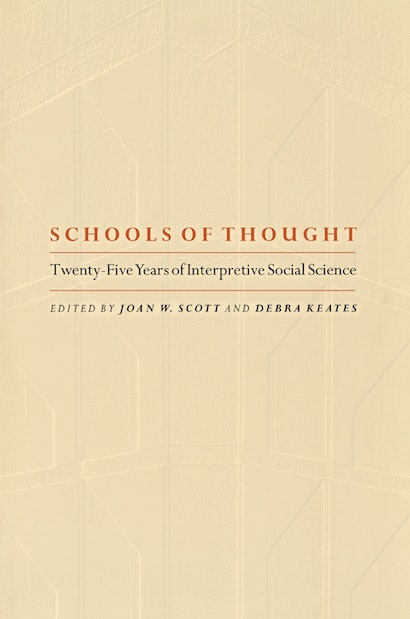 Schools of Thought brings together a cast of prominent scholars to assess, with unprecedented breadth and vigor, the intellectual revolution over the past quarter century in the social sciences. This collection of twenty essays stems from a 1997 conference that celebrated the twenty-fifth anniversary of the Institute for Advanced Study’s School of Social Science. The authors, who represent a wide range of disciplines, are all associated with the School’s emphasis on interpretive social science, which rejects models from the hard sciences and opts instead for a humanistic approach to social inquiry.


Following a preface by Clifford Geertz, whose profound insights have helped shape the School from the outset, the essays are arranged in four sections. The first offers personal reflections on disciplinary changes; the second features essays advocating changes in focus or methodology; the third presents field overviews and institutional history; while the fourth addresses the link between political philosophy and world governance. Two recurring themes are the uses (and pitfalls) of interdisciplinary studies and the relation between scholarship and social change. This book will be rewarding for anyone interested in how changing trends in scholarship shape the understanding of our social worlds.

"Schools of Thought is a tremendous contribution to scholarship in the broadest sense, or perhaps one should say, meta-scholarship. It is also loaded with rich, stimulating, and provocative essays by a roster of brilliant scholars. I can't think of anything quite like this book. It captures, in a many-faceted way, what has truly been a revolution in the social sciences in the past twenty-five years. It will be extremely widely read across the social sciences, and across many of the humanities as well."—Sherry B. Ortner, Columbia University