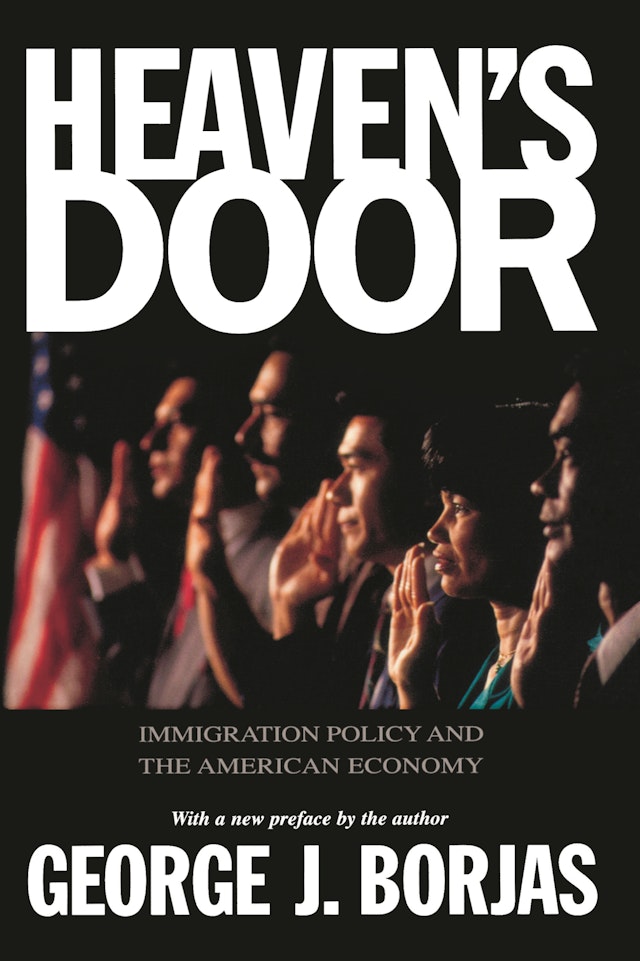 The U.S. took in more than a million immigrants per year in the late 1990s, more than at any other time in history. For humanitarian and many other reasons, this may be good news. But as George Borjas shows in Heaven’s Door, it’s decidedly mixed news for the American economy — and positively bad news for the country’s poorest citizens. Widely regarded as the country’s leading immigration economist, Borjas presents the most comprehensive, accessible, and up-to-date account yet of the economic impact of recent immigration on America. He reveals that the benefits of immigration have been greatly exaggerated and that, if we allow immigration to continue unabated and unmodified, we are supporting an astonishing transfer of wealth from the poorest people in the country, who are disproportionately minorities, to the richest.


In the course of the book, Borjas carefully analyzes immigrants’ skills, national origins, welfare use, economic mobility, and impact on the labor market, and he makes groundbreaking use of new data to trace current trends in ethnic segregation. He also evaluates the implications of the evidence for the type of immigration policy the that U.S. should pursue. Some of his findings are dramatic:


Despite estimates that range into hundreds of billions of dollars, net annual gains from immigration are only about $8 billion.


In dragging down wages, immigration currently shifts about $160 billion per year from workers to employers and users of immigrants’ services.


Immigrants today are less skilled than their predecessors, more likely to re-quire public assistance, and far more likely to have children who remain in poor, segregated communities.


Borjas considers the moral arguments against restricting immigration and writes eloquently about his own past as an immigrant from Cuba. But he concludes that in the current economic climate — which is less conducive to mass immigration of unskilled labor than past eras — it would be fair and wise to return immigration to the levels of the 1970s (roughly 500,000 per year) and institute policies to favor more skilled immigrants.

George J. Borjas is the Pforzheimer Professor of Public Policy at the John F. Kennedy School of Government, Harvard University, and a Research Associate at the National Bureau of Economic Research. He is the author of several books, including Wage Policy in the Federal Bureaucracy, Friends or Strangers: The Impact of Immigrants on the U.S. Economy, and Labor Economics, and of over one hundred articles in books and scholarly journals.

"[A] tour de force on the economics of immigration. In the policy area where emotion or ideology usually overwhelms analysis, this is a stunning piece of research—nuanced, lucid and forceful. . . . This is an enormously impressive book."—Peter Skerry, The Washington Post

"A former Cuban refugee, Borjas addresses vexing questions in the U.S. immigration debate, offering an up-to-date and informative assessment of the modern immigrant experience and an excellent review of the recent academic research."—Foreign Affairs

"Borjas is a remarkably clear guide to the issues. . . . Borjas, one is convinced, is acting from concern for the public good as his research has revealed it to him."—Nathan Glazer, Harvard Magazine

"Will probably become the most influential, widely read study of the subject."—Choice

"I highly recommend this book. It is written in a very accessible style; the arguments are easy to follow by nonexperts. . . . For those who might want to consider some important facts that bear on the future of immigration to the United States, though, I would urge them to read this book."—Jim Gimpel, Political Science Quarterly

"A lively and penetrating investigation of the economic dimension of immigration in the US . . . Borjas is an acknowledged master of inventive economic reasoning and theory, and he makes impressively extensive use of census and other data on immigrants. He, more than anyone, has brought the theoretical and methodological apparatus of contemporary economics to bear on immigration, and his contribution to the growth of the field has been considerable."—Jeffrey G. Reitz, Journal of International Migration and Integration

"Heaven's Door is by far the best introduction I have seen to the economics of immigration."—New York Review of Books

"This provocative and carefully researched book will create a lot of waves. In well written and engaging prose, George Borjas addresses some difficult questions and bravely provides some difficult answers to issues that America as a nation must confront. Heaven's Door will be controversial, but it will be by far the best and most important source document for the coming national debate on the Second Great Migration."—William Julius Wilson, Lewis P. and Linda L. Geyser University Professor, Harvard University

"A new book by George Borjas always provides original and honest insights that help us better understand immigration's impact on our country.Heaven's Door breaks important new ground on the social mobility of immigrants and their children and on the causes of the recent decline of immigrants' skills relative to those of natives. At the same time, it updates Borjas's work of the past decade on the costs and benefits of immigration. No one interested in the consequences of American immigration policy, present or proposed, should be without a well-worn copy."—U.S. Representative Lamar Smith

"The steady, thoughtful work of George Borjas has had a profound impact on the always emotional debate over immigration policy in the United States. The present nature of the national immigration debate would be different indeed were it not for Borjas's work. This book may well be controversial, but its clarity, sincerity, and relevance for anyone fascinated with immigration issues is rock solid."—Alan Simpson, U.S. Senator (Wyo.), Retired

"George Borjas has written a well-reasoned and well-documented book on the costs and benefits of immigration for the American economy. He offers imaginative proposals for reforms in immigration policies that deserve serious attention."—James J. Heckman, University of Chicago

"George Borjas has nearly single-handedly turned the economic study of immigration into a respectable and heavily researched topic. Like all his other work on the subject, this book is important reading and maybe even more valuable because it is accessible to anyone with a serious interest in the subject."—Orley Ashenfelter, Joseph Douglas Green 1895 Professor of Economics, Princeton University

"Borjas is the leading American economist today writing about immigration policy. I do not share all of his views, but they have to be taken seriously by everyone in the field, and indeed his research has shaped the field more than that of any other writer."—John Isbister, University of California, Santa Cruz