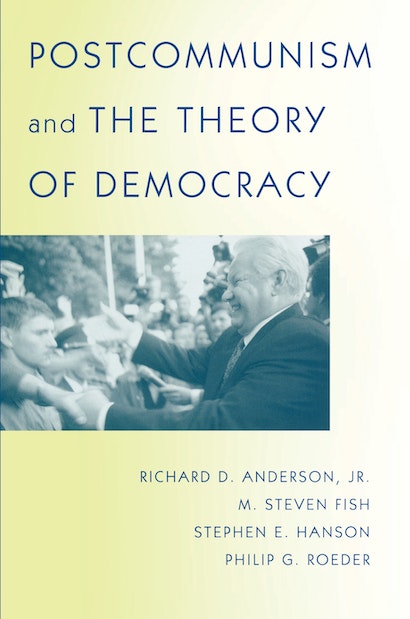 Why did the wave of democracy that swept the former Soviet Union and Eastern Europe starting more than a decade ago develop in ways unexpected by observers who relied on existing theories of democracy? In Postcommunism and the Theory of Democracy, four distinguished scholars conduct the first major assessment of democratization theory in light of the experience of postcommunist states. Richard Anderson, Steven Fish, Stephen Hanson, and Philip Roeder not only apply theory to practice, but using a wealth of empirical evidence, draw together the elements of existing theory into new syntheses.


The authors each highlight a development in postcommunist societies that reveals an anomaly or lacuna in existing theory. They explain why authoritarian leaders abandon authoritarianism, why democratization sometimes reverses course, how subjects become citizens by beginning to take sides in politics, how rulers become politicians by beginning to seek popular support, and not least, how democracy becomes consolidated. Rather than converging on a single approach, each author shows how either a rationalist, institutionalist, discursive, or Weberian approach sheds light on this transformation.


They conclude that the experience of postcommunist democracy demands a rethinking of existing theory. To that end, they offer rich new insights to scholars, advanced students, policymakers, and anyone interested in postcommunist states or in comparative democratization.

"This work will be central to anyone studying the region and democratization in general."—Choice

"This book uses the postcommunist experience to sharpen theorizing about transitions to (and from) democracy. It will have considerable appeal to the large scholarly community concerned with recent democratization (whatever its geographical focus) and to their students. The contributors, all well-known scholars who share considerable area expertise but diverge in their theoretical approaches, provide the reader with a rethinking of a number of concepts and arguments central to the study of democratization."—Valerie Bunce, Cornell University, President of the American Association for the Advancement of Slavic Studies, 2000-2001

"The authors argue convincingly that many of the postcommunist cases appear to be an anomaly from the perspective of democratic theory, and that these anomalies need to be explained. They are very well read in the literature on democratization in addition to their area specialties, and they have something important to say about a question central to comparative politics."—Stephen Crowley, Oberlin College