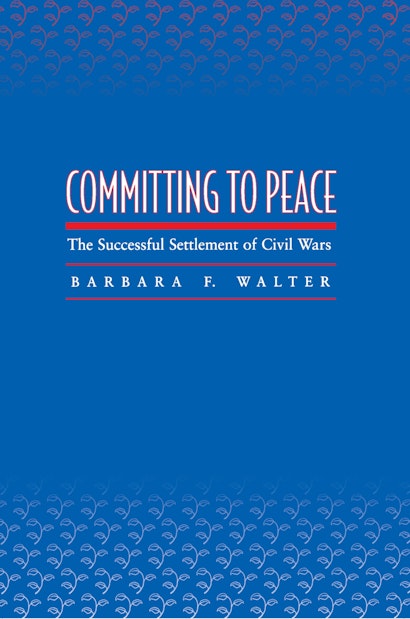 Why do some civil wars end in successfully implemented peace settlements while others are fought to the finish? Numerous competing theories address this question. Yet not until now has a study combined the historical sweep, empirical richness, and conceptual rigor necessary to put them thoroughly to the test and draw lessons invaluable to students, scholars, and policymakers. Using data on every civil war fought between 1940 and 1992, Barbara Walter details the conditions that lead combatants to partake in what she defines as a three-step process — the decision on whether to initiate negotiations, to compromise, and, finally, to implement any resulting terms. Her key finding: rarely are such conflicts resolved without active third-party intervention.

Walter argues that for negotiations to succeed it is not enough for the opposing sides to resolve the underlying issues behind a civil war. Instead the combatants must clear the much higher hurdle of designing credible guarantees on the terms of agreement — something that is difficult without outside assistance. Examining conflicts from Greece to Laos, China to Columbia, Bosnia to Rwanda, Walter confirms just how crucial the prospect of third-party security guarantees and effective power-sharing pacts can be — and that adversaries do, in fact, consider such factors in deciding whether to negotiate or fight. While taking many other variables into account and acknowledging that third parties must also weigh the costs and benefits of involvement in civil war resolution, this study reveals not only how peace is possible, but probable.

Barbara F. Walter is Assistant Professor of Political Science in the Graduate School of International Relations and Pacific Studies at the University of California, San Diego. She is the coeditor of Civil Wars, Insecurity, and Intervention.

"This book is thoroughly researched and rigorously argued and tested. Walter offers valuable insight into the thorny issues of civil war termination and transitions to democracy. The three-phased model presented here is an important contribution to the literature."—Virginia Quarterly Review

"Although much has been written about the settlement of civil wars, Walter's delineation of three phases and careful analysis of what matters to success is a significant contribution. Her skillful integration of quantitative analysis and case studies uncovers much that would otherwise be missed."—Choice

"This is an important book on the conditions under which negotiated settlements can be reached in civil wars and something of a model of how social science should be done. It has been in process for a long time ... and the author has used her time well. . . . This book was worth waiting for."—Roy Licklider, Journal of Peace Research

"This is an important book in an area that is rapidly becoming central to both policy and theoretical concerns, the conditions under which negotiated settlements can be reached in civil wars. Walter's distinction of three phases of settlement (negotiation, agreement, implementation) is a significant theoretical step forward."—Roy Licklider, Rutgers University