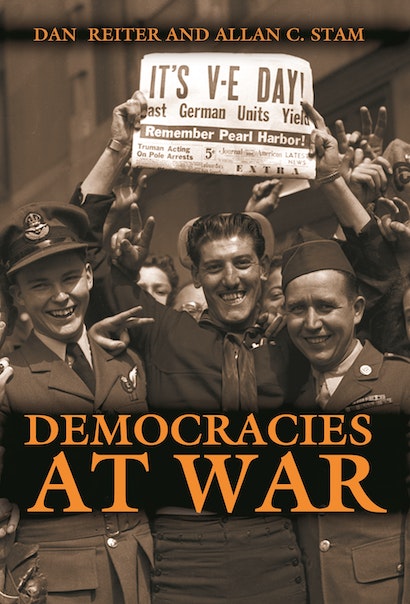 Why do democracies win wars? This is a critical question in the study of international relations, as a traditional view — expressed most famously by Alexis de Tocqueville — has been that democracies are inferior in crafting foreign policy and fighting wars. In Democracies at War, the first major study of its kind, Dan Reiter and Allan Stam come to a very different conclusion. Democracies tend to win the wars they fight — specifically, about eighty percent of the time.


Complementing their wide-ranging case-study analysis, the authors apply innovative statistical tests and new hypotheses. In unusually clear prose, they pinpoint two reasons for democracies’ success at war. First, as elected leaders understand that losing a war can spell domestic political backlash, democracies start only those wars they are likely to win. Secondly, the emphasis on individuality within democratic societies means that their soldiers fight with greater initiative and superior leadership.


Surprisingly, Reiter and Stam find that it is neither economic muscle nor bandwagoning between democratic powers that enables democracies to win wars. They also show that, given societal consent, democracies are willing to initiate wars of empire or genocide. On the whole, they find, democracies’ dependence on public consent makes for more, rather than less, effective foreign policy. Taking a fresh approach to a question that has long merited such a study, this book yields crucial insights on security policy, the causes of war, and the interplay between domestic politics and international relations.

Dan Reiter is Associate Professor and Winship Research Professor in the Department of Political Science at Emory University. He is the author of Crucible of Beliefs: Learning, Alliances, and World Wars. Allan C. Stam is Associate Professor of Government and Deputy Director of Academic Programs at Rockefeller Center, Dartmouth College. He is the author of Win, Lose, or Draw: Domestic Politics and the Crucible of War.

"This is currently the best book on the security policies of democratic states and the big one everyone concerned with the topic will have to read immediately. It contains the most rigorous logic, the richest set of evidence, and the widest scope. Forceful, accessible, and lively, it will be widely read by international relations scholars and by a broad range of students and policy analysts."—Bruce Russett, Yale University

"An important and timely book that answers a major question and opens up new avenues of research."—H. E. Goemans, Duke University

"The authors deserve much praise for asking questions that go beyond the exploration of 'the causes of war' to examine political dynamics within war, a tremendously neglected subject in political science. They deserve praise for using statistical data and methods in a field dominated by case study analysis. Their book will be widely discussed."—Stephen Rosen, Harvard University