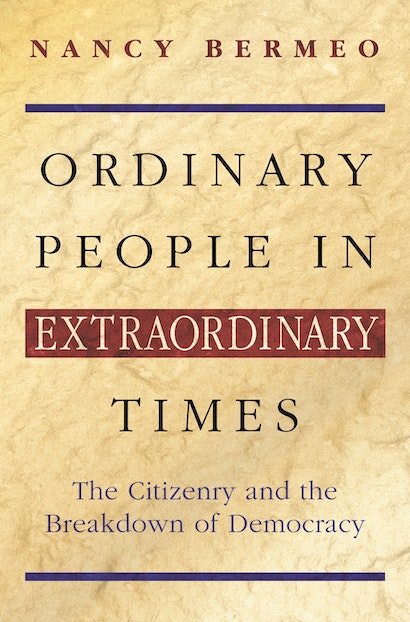 For generations, influential thinkers — often citing the tragic polarization that took place during Germany’s Great Depression — have suspected that people’s loyalty to democratic institutions erodes under pressure and that citizens gravitate toward antidemocratic extremes in times of political and economic crisis. But do people really defect from democracy when times get tough? Do ordinary people play a leading role in the collapse of popular government?


Based on extensive research, this book overturns the common wisdom. It shows that the German experience was exceptional, that people’s affinity for particular political positions are surprisingly stable, and that what is often labeled polarization is the result not of vote switching but of such factors as expansion of the franchise, elite defections, and the mobilization of new voters. Democratic collapses are caused less by changes in popular preferences than by the actions of political elites who polarize themselves and mistake the actions of a few for the preferences of the many. These conclusions are drawn from the study of twenty cases, including every democracy that collapsed in the aftermath of the Russian Revolution in interwar Europe, every South American democracy that fell to the Right after the Cuban Revolution, and three democracies that avoided breakdown despite serious economic and political challenges.


Unique in its historical and regional scope, this book offers unsettling but important lessons about civil society and regime change — and about the paths to democratic consolidation today.

Nancy Bermeo is Professor of Political Science at Princeton University. She is the author of Revolution Within a Revolution (Princeton) and a senior editor of World Politics.

"[An] outstanding contribution to theory and policy. . . . Highly readable, informative, and intelligible."—Choice

"Nancy Bermeo's wide-ranging and scholarly study of seventeen modern democracies which have failed tracks the behavior of ordinary democratic citizens during the critical periods and makes the case that most of them remained loyal to the democratic process, even at the worst of times."—Ian Johnston, Humanist Perspectives

"Comparative politics needs more books like this. I am extremely impressed by Bermeo's great command of the literature, her ability to simultaneously engage the reader in the commonalties and specificities of her cases, and the sustained and convincing argument she advances. Her book will force a major reconceptualization of what 'voter polarization' means."—Alfred Stepan, Columbia University

"Lucid and compelling, this book will change the way in which comparative politics conceives of the polarization of politics associated with the failure of democracy. It will be an enduring contribution."—Michael Bernhard, Pennsylvania State University