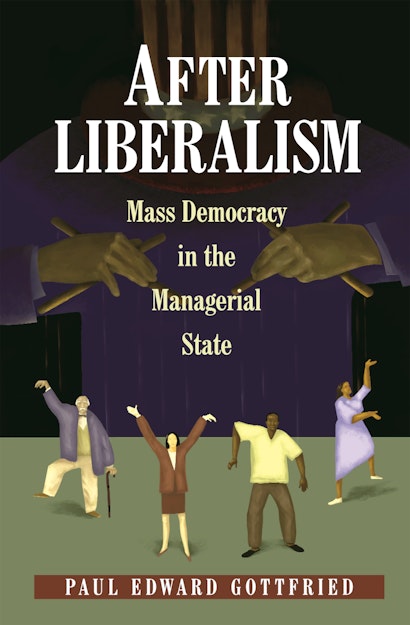 In this trenchant challenge to social engineering, Paul Gottfried analyzes a patricide: the slaying of nineteenth-century liberalism by the managerial state. Many people, of course, realize that liberalism no longer connotes distributed powers and bourgeois moral standards, the need to protect civil society from an encroaching state, or the virtues of vigorous self-government. Many also know that today’s “liberals” have far different goals from those of their predecessors, aiming as they do largely to combat prejudice, to provide social services and welfare benefits, and to defend expressive and “lifestyle” freedoms. Paul Gottfried does more than analyze these historical facts, however. He builds on them to show why it matters that the managerial state has replaced traditional liberalism: the new regimes of social engineers, he maintains, are elitists, and their rule is consensual only in the sense that it is unopposed by any widespread organized opposition.


Throughout the western world, increasingly uprooted populations unthinkingly accept centralized controls in exchange for a variety of entitlements. In their frightening passivity, Gottfried locates the quandary for traditionalist and populist adversaries of the welfare state. How can opponents of administrative elites show the public that those who provide, however ineptly, for their material needs are the enemies of democratic self-rule and of independent decision making in family life? If we do not wake up, Gottfried warns, the political debate may soon be over, despite sporadic and ideologically confused populist rumblings in both Europe and the United States.

Paul Edward Gottfried is Professor of Humanities at Elizabethtown College and author of, among other books, Carl Schmitt: Politics and Theory, The Search for Historical Meaning; and The Conservative Movement. Editor in chief of This World, he is also a senior editor of Telos and a contributing editor to Chronicles and Humanitas.

"After Liberalism is no angry screed, but a dense, probing work full of insight from the author's seeming encyclopedic knowledge of Western thought."—World

"The central fact of the nineteenth century was the emergence of the working class. The central fact of the twentieth century is the emergence of a managerial "New Class" elite, reshaping all modern democracies in its own interest. Gottfried's is a gold-standard analysis of this extraordinary phenomenon, heavily encrusted with sparkling jewels of intellectual history."—Peter Brimelow, Senior Editor, Forbes Magazine

"Although I disagree with the author on many of his points, I strongly recommend it. Gottfried's thesis is refreshingly novel, strongly advanced, and clearly presented. Whether one is interested in the future of the welfare state or family values, or the economic and social future of America, this is a book one wishes to read."—Amitai Etzioni, author of The New Golden Rule

"This brilliant and disquieting book should reshape current debates and be essential reading for all who seek to understand them."—Elizabeth Fox-Genovese