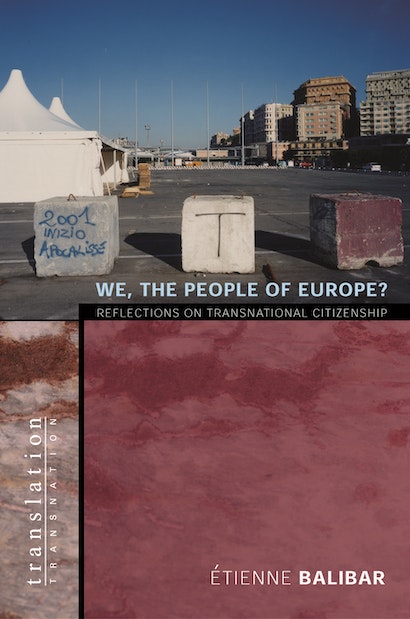 étienne Balibar has been one of Europe’s most important philosophical and political thinkers since the 1960s. His work has been vastly influential on both sides of the Atlantic throughout the humanities and the social sciences. In We, the People of Europe?, he expands on themes raised in his previous works to offer a trenchant and eloquently written analysis of “transnational citizenship” from the perspective of contemporary Europe. Balibar moves deftly from state theory, national sovereignty, and debates on multiculturalism and European racism, toward imagining a more democratic and less state-centered European citizenship.


Although European unification has progressively divorced the concepts of citizenship and nationhood, this process has met with formidable obstacles. While Balibar seeks a deep understanding of this critical conjuncture, he goes beyond theoretical issues. For example, he examines the emergence, alongside the formal aspects of European citizenship, of a “European apartheid,” or the reduplication of external borders in the form of “internal borders” nurtured by dubious notions of national and racial identity. He argues for the democratization of how immigrants and minorities in general are treated by the modern democratic state, and the need to reinvent what it means to be a citizen in an increasingly multicultural, diversified world. A major new work by a renowned theorist, We, the People of Europe? offers a far-reaching alternative to the usual framing of multicultural debates in the United States while also engaging with these debates.

Étienne Balibar is Emeritus Professor of Philosophy at the University of Paris-X and Distinguished Professor of Humanities at the University of California, Irvine. His previous books in English include Masses, Classes, Ideas, Politics and the Other Scene, Race, Nation, Class (with Immanuel Wallerstein), Reading Capital (with Louis Althusser), Spinoza and Politics, and The Philosophy of Marx.

"Balibar tackles a wide range of themes associated with a dialectic of the construction of 'Europe.' . . . The writing is clear, informed, and provocative."—Choice

"There is much merit to this book as a work of political philosophy, inasmuch as it provides new analyses of the concept of sovereignty and develops new ideas about the nature of citizenship under post-modern conditions."—Gustav Peebles, Political Science Quarterly

"This is clearly one of the most prodigious political accomplishments of our time. In open and engaging prose, Balibar offers a serious and thoroughgoing study of the problem of what constitutes citizenship under changing conditions of immigration in Europe. His critique is accompanied by a political vision of democracy at once chastened and hopeful."—Judith Butler, University of California, Berkeley, author of The Psychic Life of Power

"An extremely important book. Anything Balibar writes is sure to find an extremely eager audience in the United States. But the subject of this book—the new politics of immigration and racism in a newly unifying Europe, the very real threat that unification will mean a European version of apartheid, and the possibility that a transnational political counter-subject ("we, the people of Europe") can emerge to oppose globalization—is even more topical than those Balibar has led us to expect from him. His striking and sometimes dazzling commentaries on the various frameworks and discourses at play will be of immediate interest to readers in a wide range of fields."—Bruce Robbins, Columbia University, author of The Servant's Hand