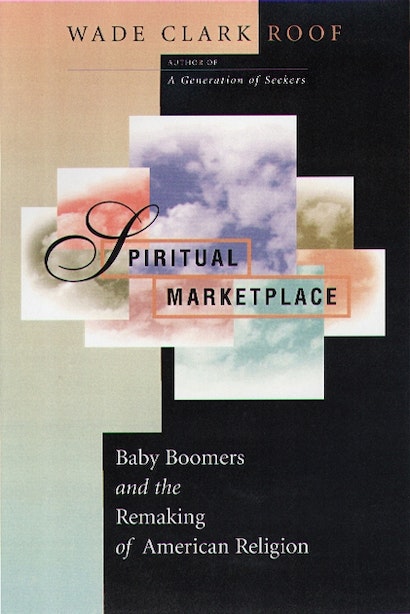 In large chain bookstores the “religion” section is gone and in its place is an expanding number of topics including angels, Sufism, journey, recovery, meditation, magic, inspiration, Judaica, astrology, gurus, Bible, prophesy, evangelicalism, Mary, Buddhism, Catholicism, and esoterica. As Wade Clark Roof notes, such changes over the last two decades reflect a shift away from religion as traditionally understood to more diverse and creative approaches. But what does this splintering of the religious perspective say about Americans? Have we become more interested in spiritual concerns or have we become lost among trends? Do we value personal spirituality over traditional religion and no longer see ourselves united in a larger community of faith? Roof first credited this religious diversity to the baby boomers in his bestselling A Generation of Seekers (1993). He returns to interview many of these people, now in mid-life, to reveal a generation with a unique set of spiritual values — a generation that has altered our historic interpretations of religious beliefs, practices, and symbols, and perhaps even our understanding of the sacred itself.


The quest culture created by the baby boomers has generated a “marketplace” of new spiritual beliefs and practices and of revisited traditions. As Roof shows, some Americans are exploring faiths and spiritual disciplines for the first time; others are rediscovering their lost traditions; others are drawn to small groups and alternative communities; and still others create their own mix of values and metaphysical beliefs. Spiritual Marketplace charts the emergence of five subcultures: dogmatists, born-again Christians, mainstream believers, metaphysical believers and seekers, and secularists. Drawing on surveys and in-depth interviews for over a decade, Roof reports on the religious and spiritual styles, family patterns, and moral vision and values for each of these subcultures. The result is an innovative, engaging approach to understanding how religious life is being reshaped as we move into the next century.

Wade Clark Roof, a well-known commentator on religious trends in the United States, is the J. F. Rowny Professor of Religion and Society at the University of California, Santa Barbara. He is the author of eight books, including A Generation of Seekers: The Spiritual Lives of the Baby Boom Generation.

"This book shows not only how the 76 million boomers have been shaped by such seeking but how they have remapped the spiritual landscape for all Americans; boomers have shifted attention from the institution to the individual, emphasized 'lived religion' (religion in practice) and created a 'quest culture'."—Publishers Weekly

"What does it mean [to be] spiritual? That's what Roof has set out to ask and to answer: to track, capture, and name the current varieties of religious or spiritual experience in America. What he's come up with is a kind of metaphysical seed-catalog, a bewildering array of groups and sub-groups, beliefs and opinions, views and world-views, much of it mixed and matched."—Mark Buchanan, Books & Culture

"Roof writes in a jargon-free, accessible style, often lucidly summarizing (and challenging) the arguments of other sociologists and cultural observers."—Choice

"Full of interesting findings and provocative interpretations."—Sociology of Religion

"This is a seminal study for the sociology of religion. It should be considered indispensable to anyone trying to take the spiritual pulse of America."—John A. Coleman, S.J., Spiritus

"A significant contribution to understanding trends in the lived religion of many Americans in their question for meaning."—Jackson W. Carroll, Journal of the American Academy of Religion

"This will be the book to consult for both a synthesis of what has been observed in the areas of American religion and spirituality and for some fresh observations about where American searchers are moving. Wade Clark Roof writes so clearly, is so jargon-free, and is so ready to share his insights with the public that I would think everyone from college-textbook users through mass ommunicators to humanistic and social scientific observers of the American scene would find it intelligible and useful."——Martin E. Marty, Professor Emeritus and Director of the Public Religion Project, University of Chicago

"This is an engaging book that will easily be read by undergraduates and folks in the pews as well as by academics. One of its key arguments is that American religion can best be characterized by searching, rather than by stable identities or by preferences or affiliations with particular denominations or traditions. Spiritual Marketplace explores the social sources of this searching and how it affects Americans' understandings of personal identity, their commitments to religious institutions, and their moral orientations. The book succeeds admirably in accomplishing its ambitious aims."—Robert Wuthnow, Princeton University