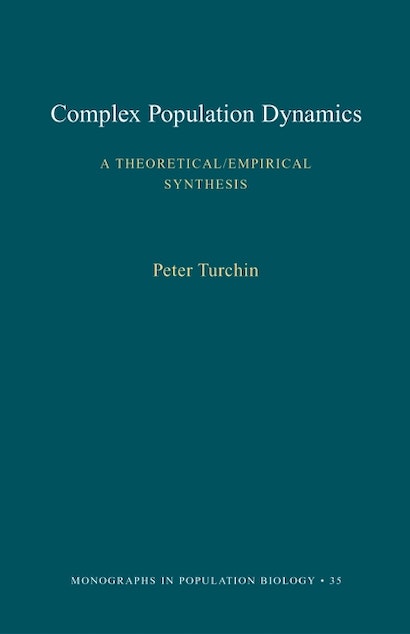 Why do organisms become extremely abundant one year and then seem to disappear a few years later? Why do population outbreaks in particular species happen more or less regularly in certain locations, but only irregularly (or never at all) in other locations? Complex population dynamics have fascinated biologists for decades. By bringing together mathematical models, statistical analyses, and field experiments, this book offers a comprehensive new synthesis of the theory of population oscillations.


Peter Turchin first reviews the conceptual tools that ecologists use to investigate population oscillations, introducing population modeling and the statistical analysis of time series data. He then provides an in-depth discussion of several case studies — including the larch budmoth, southern pine beetle, red grouse, voles and lemmings, snowshoe hare, and ungulates — to develop a new analysis of the mechanisms that drive population oscillations in nature. Through such work, the author argues, ecologists can develop general laws of population dynamics that will help turn ecology into a truly quantitative and predictive science.

Complex Population Dynamics integrates theoretical and empirical studies into a major new synthesis of current knowledge about population dynamics. It is also a pioneering work that sets the course for ecology’s future as a predictive science.

Peter Turchin is Professor of Ecology and Evolutionary Biology at the University of Connecticut. He is the author of Quantitative Analysis of Movement and more than sixty scientific articles, including several in Nature and Science.

"Turchin has to be congratulated for the conceptual clarity of the book. . . . I especially recommend the book's first two parts to anyone interested in how to model and analyze population fluctuations. . . . Turchin offers researchers and students alike interesting material and a great deal to think about."—Esa Ranta, Science

"This book contributes profoundly to the literature. . . . [It] may have a huge impact on the field."—Nils Chr. Stenseth, Nature

"A superbly written text offering many fresh insights both pragmatic and profound. . . . Throughout the book, Turchin manages to present complex material in an informal style with clarity and eloquence."—Douglas H. Deutschman, Ecology

"This book gives an excellent introduction to our maturing understanding of how ideas about nonlinear dynamical systems can shed light on the complex behavior of real populations. Turchin first presents the theoretical concepts, next the data, and finally brings the two together in thoughtfully presented case studies. He splendidly achieves his aim of showing how ecological problems can be illuminated by mathematical models which are—in Einstein's words—'as simple as possible, but not more so.' "—Robert M. May, President, Royal Society

"This book is a true landmark in the study of population ecology. Never before has a lucid synthesis of the basic principles and models of population dynamics been so effectively merged with insightful analyses of some of the best data for populations of insects, birds and mammals. Peter Turchin writes with admirable clarity and authority, always retaining a focus on issues that really matter for population ecology."—Ilkka Hanski, University of Helsinki

"Turchin has done an outstanding job and produced a significant milestone in our understanding of population dynamics. I have long been seeking a book like this. It is readable and accessible while going into a good depth that so many undergraduate texts fail. All people working in the field will use it, and professors will use it in courses on population dynamics. The presentation is superb—the text gallops along."—Peter Hudson, University of Stirling