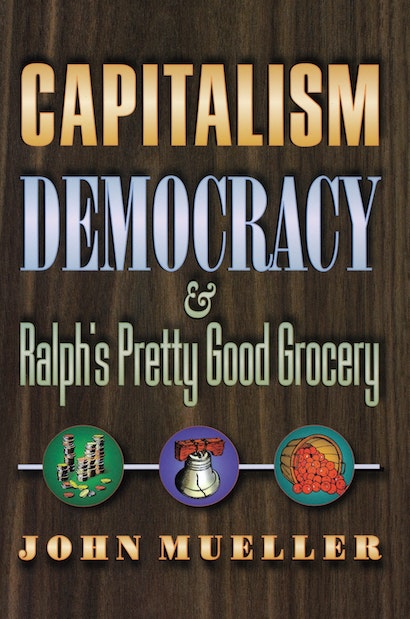 Democracy is overrated. Capitalism, on the other hand, doesn’t get enough credit. In this provocative and engaging book, John Mueller argues that these mismatches between image and reality create significant political and economic problems — inspiring instability, inefficiency, and widespread cynicism. We would be far better off, he writes, if we recognized that neither system is ideal or disastrous and accepted instead the humdrum truth that both are “pretty good.” And, to Mueller, that means good enough. He declares that what is true of Garrison Keillor’s fictional store “Ralph’s Pretty Good Grocery” is also true of democracy and capitalism: if you can’t get what you want there, “you can probably get along without it.”


Mueller begins by noting that capitalism is commonly thought to celebrate greed and to require discourtesy, deceit, and callousness. However, with examples that range from car dealerships and corporate boardrooms to the shop of an eighteenth-century silk merchant, Mueller shows that capitalism in fact tends to reward behavior that is honest, fair, civil, and compassionate. He argues that this gap between image and reality hampers economic development by encouraging people to behave dishonestly, unfairly, and discourteously to try to get ahead and to neglect the virtuous behavior that is an important source of efficiency and gain.


The problem with democracy’s image, by contrast, is that our expectations are too high. We are too often led by theorists, reformers, and romantics to believe that democracy should consist of egalitarianism and avid civic participation. In fact, democracy will always be chaotic, unequal, and marked by apathy. It offers reasonable freedom and security, but not political paradise. To idealize democracy, Mueller writes, is to undermine it, since the inevitable contrast with reality creates public cynicism and can hamper democracy’s growth and development.


Mueller presents these arguments with sophistication, wit, and erudition. He combines mastery of current political and economic literature with references to figures ranging from Plato to P. T. Barnum, from Immanuel Kant to Ronald Reagan, from Shakespeare to Frank Capra. Broad in scope and rich in detail, the book will provoke debate among economists, political scientists, and anyone interested in the problems (or non-problems) of modern democracy and capitalism.

John Mueller is Professor of Political Science at the University of Rochester. His previous books include War, Presidents, and Public Opinion, Retreat from Doomsday: The Obsolescence of Major War, and Quiet Cataclysm: Reflections on the Recent Transformation of World Politics. He is a regular contributor to numerous academic journals and has written editorial page columns in The New York Times, The Wall Street Journal, and The Los Angeles Times. Outside the field of political science, Mueller has written the prize-winning Astaire Dancing: The Musical Films (Knopf) and cowritten A Foggy Day, a musical presented at the Shaw Festival in Ontario.

"Many thought-provoking ideas are packed into this nuanced work, and Mueller's case is strong and well-documented."—Library Journal

"Mueller is an entertaining guide through economic and political history, using references to Shakespeare, Adam Smith, Hume, Mencken and many more writers to produce deft explanations of complex ideas."—Publisher's Weekly

"John Mueller has written an outstanding book about capitalism and democracy. He argues that each system has existed without the other, but that both are improved when they occur in tandem. Capitalism and democracy differ in cultural repute. Capitalism has a bad press even though as a result of competition, it tends to treat the customer well. Capitalist leaders are not 'robber barons,' but nice guys who finish first. Democracy, on the other hand, is perhaps over-praised: it embodies the play of special interests and while conceding political rights, only benefits the people as a whole when it is tied to a capitalist growth strategy. Fortunately, economists are now able to provide that strategy so that by following their advice, societies can progress. Neither democracy nor capitalism, however, satisfies all human or psychic wants. They are at best a reflection of Ralph's Pretty Good Grocery (where you can get everything you really need) rather than Alice's Restaurant (where you can get anything you want). Mueller has contributed a new and provocative interpretation that will resonate for years to come."—Richard Rosecrance, University of California, Los Angeles

"This is a lively, smart, well-written, and often compelling book. The frequent and pointed comments that visions of perfect democracy and markets miss the point of how a society can work are well made."—Russell Hardin, New York University

"We have here a seasoned political scientist and thinker with total control over his material. The result is an extremely engaging text, one that will be read for its excitement in the best graduate seminars and the best political science programs in the country. I have little doubt that, even in this heavily researched area of economics and democracy, his book will make a big splash, comparable to Inglehart's Culture Shift or Putnam's Making Democracy Work."—Michael Lewis-Beck, University of Iowa