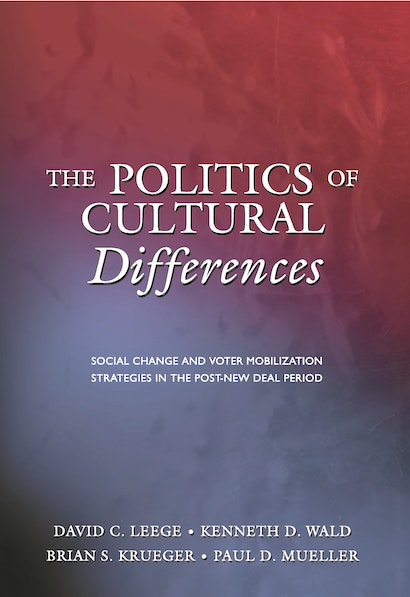 How did Republicans manage to hold the White House through much of the past half century even as the Democratic Party held the hearts of most American voters? The authors of this groundbreaking study argue that they did so by doing what Democrats have also excelled at: triggering psychological mechanisms that deepen cultural divisions in the other party’s coalition, thereby leading many of its voters either to choose the opposing ticket or to stay home.

The Politics of Cultural Differences is the first book to develop and carefully test a general theory of cultural politics in the United States, one that offers a compelling new perspective on America’s changing political order and political conflict in the post-New Deal period (1960-1996). David Leege, Kenneth Wald, Brian Krueger, and Paul Mueller move beyond existing scholarship by formulating a theory of campaign strategies that emphasizes cultural conflict regarding patriotism, race, gender, and religion. Drawing on National Election Studies data, they find that Republican politicians deployed powerful symbols (e.g., “tax and spend liberals”) to channel targeted voters toward the minority party. And as partisanship approached parity in the 1990s, Democratic leaders proved as adept at deploying their own symbols, such as “a woman’s right to choose,” to disassemble the Republican coalition. A blend of sophisticated theory and advanced empirical tools, this book lays bare the cultural dimensions of American political life.

"The Politics of Cultural Differences provides a compelling account of American electoral politics, and of presidential campaigns specifically, over the last four decades of the twentieth century."—Robert A. Jackson, Social Forces

"The Politics of Cultural Differences is a major theoretical and empirical contribution to the scholarly study of presidential elections, one that will quickly challenge other, more traditional models of voting. It is also an important work of social science that connects with the practical world of politics. Political consultants and journalists will recognize in these pages the strategic behavior of political elites to manipulate the symbols of cultural politics and responses of citizens to those appeals. This masterful book has been dramatically narrowed the gulf between scholars and practitioners of campaigns and elections."—Thomas E. Mann, W. Averell Harriman Chair and Senior Fellow, The Brookings Institution

"The fragmentation of political society in the U.S. is a fascinating phenomenon and this is the best book I've seen on that topic. I read it carefully and learned a good deal by doing so. The authors cover a tremendous swath of material and do so in a convincing and authoritative way. Their defection/abstention approach is genuinely fresh and interesting, a major contribution to electoral studies. Because 'primary group affiliations' are so important to so many Americans, the book will tap into a natural, national curiosity (among both voters and journalists) about such matters."—Roderick P. Hart, University of Texas at Austin, author of Campaign Talk

"The Politics of Cultural Differences could have a big impact in political science, pushing the field to devise new ways to see the impact of campaign appeals on individuals in American politics and encouraging a new kind of thoughtfulness about groups in American politics. The book made me think about big questions—the connections between thought and action and the role of idea-based and group-based appeals in American politics. The authors' interest in both defection and abstention is especially thought-provoking."—Nancy Burns, University of Michigan, author of The Formation of American Local Government and The Private Roots of Public Action