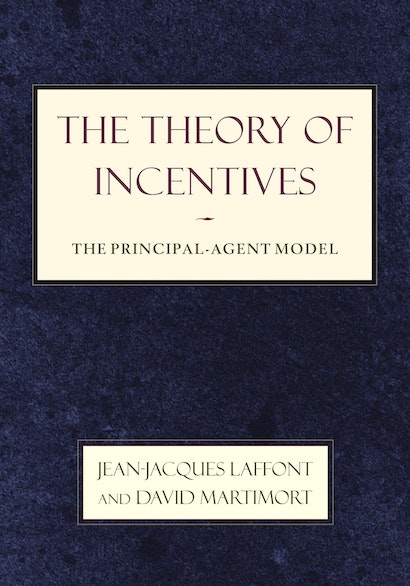 Economics has much to do with incentives — not least, incentives to work hard, to produce quality products, to study, to invest, and to save. Although Adam Smith amply confirmed this more than two hundred years ago in his analysis of sharecropping contracts, only in recent decades has a theory begun to emerge to place the topic at the heart of economic thinking. In this book, Jean-Jacques Laffont and David Martimort present the most thorough yet accessible introduction to incentives theory to date. Central to this theory is a simple question as pivotal to modern-day management as it is to economics research: What makes people act in a particular way in an economic or business situation? In seeking an answer, the authors provide the methodological tools to design institutions that can ensure good incentives for economic agents.


This book focuses on the principal-agent model, the “simple” situation where a principal, or company, delegates a task to a single agent through a contract — the essence of management and contract theory. How does the owner or manager of a firm align the objectives of its various members to maximize profits? Following a brief historical overview showing how the problem of incentives has come to the fore in the past two centuries, the authors devote the bulk of their work to exploring principal-agent models and various extensions thereof in light of three types of information problems: adverse selection, moral hazard, and non-verifiability. Offering an unprecedented look at a subject vital to industrial organization, labor economics, and behavioral economics, this book is set to become the definitive resource for students, researchers, and others who might find themselves pondering what contracts, and the incentives they embody, are really all about.

Jean-Jacques Laffont is Professor of Economics and Director of the Institut d'Economie Industrielle (IDEI) at the University of Social Sciences in Toulouse, one of Europe's leading centers for the study of economics. He has won a number of prestigious awards for his research and is a former President of the European Economic Association and of the Econometric Society. His books include The Economics of Uncertainty and Information, Fundamentals of Public Economics, Incentives and Political Economy, and he is the coauthor of Incentives in Public Decision Making, A Theory of Incentives in Procurement and Regulation, and Competition in Telecommunications. David Martimort is Professor of Economics and a research fellow of the IDEI at the University of Social Sciences in Toulouse. He has been a visiting professor at Harvard, MIT, Pompeu Fabra in Barcelona, ECARE in Brussels, and is a member of the Center for Economic and Policy Research in the United Kingdom. He is Associate Editor of the Rand Journal of Economics.

"Incentive theory is at the very core of economics. This text is a masterly exposition of the modern theory by one of the pioneers of the field, Jean-Jacques Laffont, together with one of its rising stars, David Martimort."—Eric Maskin, Institute for Advanced Study

"This book will surely be the standard technical reference in an important field for a number of years—possibly for many if the field ceases to develop so rapidly. It is indeed a fine contribution to the economics literature."—Sir James Mirrlees, Cambridge University, 1996 Nobel Laureate in Economic Sciences

"The most important development in economics in the last forty years has been the study of incentives to achieve potential mutual gains when the parties have different degrees of knowledge. The time is ripe for a synthesis and systematization. Jean-Jacques Laffont has been one of the most important contributors to the field over the years, and David Martimort has shown his capacity for highly original work. This book, dealing with the basic models of the field, combines clarity, thoroughness, and great respect for historical development."—Kenneth J. Arrow, Stanford University, 1972 Nobel Laureate in Economic Sciences