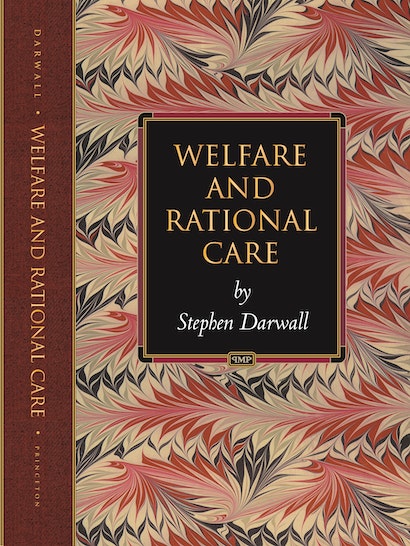 What kind of life best ensures human welfare? Since the ancient Greeks, this question has been as central to ethical philosophy as to ordinary reflection. But what exactly is welfare? This question has suffered from relative neglect. And, as Stephen Darwall shows, it has done so at a price. Presenting a provocative new “rational care theory of welfare,” Darwall proves that a proper understanding of welfare fundamentally changes how we think about what is best for people.


Most philosophers have assumed that a person’s welfare is what is good from her point of view, namely, what she has a distinctive reason to pursue. In the now standard terminology, welfare is assumed to have an “agent-relative normativity.” Darwall by contrast argues that someone’s good is what one should want for that person insofar as one cares for her. Welfare, in other words, is normative, but not peculiarly for the person whose welfare is at stake. In addition, Darwall makes the radical proposal that something’s contributing to someone’s welfare is the same thing as its being something one ought to want for her own sake, insofar as one cares. Darwall defends this theory with clarity, precision, and elegance, and with a subtle understanding of the place of sympathetic concern in the rich psychology of sympathy and empathy. His forceful arguments will change how we understand a concept central to ethics and our understanding of human bonds and human choices.

Stephen Darwall is John Dewey Collegiate Professor of Philosophy at the University of Michigan. He has written widely on the history and the foundations of ethics, and is the author of Impartial Reason, The British Moralists and the Internal ‘Ought': 1640-1740, and Philosophical Ethics. He is also Associate Editor of Ethics.

"Darwall sets a new standard for discussion. . . . [He] is notably clear and noble about the sources of his claims, and he has an immensely illuminative way with the history of ethics."—A.E. Wengraf, Philosophical Inquiry

"Anyone who cares for ethics and conceptual analysis has good reasons to engage with the close reasoning in this book."—Richard J. Arneson, Ethics

"I warmly recommend the book. Darwall's prose is as elegant and captivating as ever, and anyone with an interest in welfare, metaethics, or moral psychology will find useful things."—Jonas Olson, Economics and Philosophy

"This book proposes a new view on a central topic in contemporary ethics. It covers a great deal of ground in a short space but also has a clear core: an analysis of the key ethical concept of welfare that is both different from and more promising than those already proposed. This is the most interesting analysis of welfare on offer."—Thomas Hurka, author of Virtue, Vice, and Value and Perfectionism

"Darwall is a highly respected figure in analytic ethics, admired by many for both the quality of his analysis and argumentation and for the clarity of his writing—virtues that are on ample display here. The book is a pleasure to read. Anyone interested in the particular topics he covers will benefit from his treatment of them. This is particularly true of his careful analysis of the several forms of empathy and sympathy, and his recursive account of virtue."—Wayne Sumner, author of Welfare, Happiness, and Ethics and The Moral Foundation of Rights