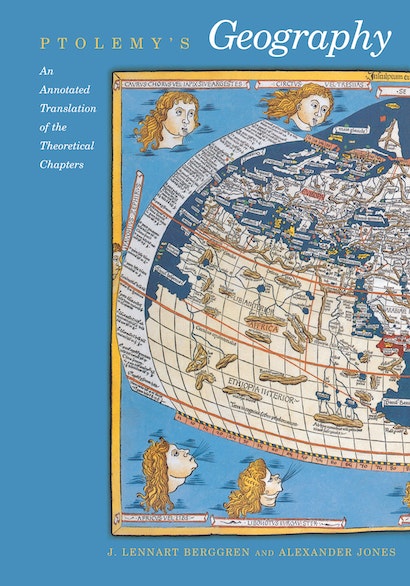 Ptolemy’s Geography is the only book on cartography to have survived from the classical period and one of the most influential scientific works of all time. Written in the second century AD, for more than fifteen centuries it was the most detailed topography of Europe and Asia available and the best reference on how to gather data and draw maps. Ptolemy championed the use of astronomical observation and applied mathematics in determining geographical locations. But more importantly, he introduced the practice of writing down coordinates of latitude and longitude for every feature drawn on a world map, so that someone else possessing only the text of the Geography could reproduce Ptolemy’s map at any time, in whole or in part, at any scale.


Here Berggren and Jones render an exemplary translation of the Geography and provide a thorough introduction, which treats the historical and technical background of Ptolemy’s work, the contents of the Geography, and the later history of the work.

J. Lennart Berggren is Professor of Mathematics at Simon Fraser University and twice president of the Canadian Society for the History and Philosophy of Mathematics. His previous books include Episodes in the Mathematics of Medieval Islam, and Pi: A Source Book.
Alexander Jones is Professor of Classics and of the History and Philosophy of Science at the University of Toronto. He studies the history of the exact sciences in antiquity. He is the author of Pappus of Alexandria: Book 7 of the Collection and Astronomical Papyri from Oxyrhynchus.

"A superlative new translation. . . . In Berggren and Jones [Ptolemy] has, at long last, found his ideal exponents."—Peter Green, London Review of Books

"Arguably, [Ptolemy's Geography] has been the most lastingly influential of all works in the earth sciences. . . . This is a most useful volume, destined to be a primary source for classical scholars as well as for historians of science."—William A.S. Sarjeant, Earth Sciences History

"By allowing us to hear in English the voice of one who was both the chief cartographer of the Greek world and the inspiration for the fifteenth-century cartographic revolution, Berggren and Jones have masterfully met a long-felt need."—Robert W. Karrow, Jr., Technology and Culture

"Until now there has been no reliable translation of the Geography in English. Berggren and Jones have triumphantly filled that lack for the crucial portion of the work, the portion in which Ptolemy speaks as scientific geographer."—Lionel Casson, Classical Bulletin

"The translation is exemplary, surely the best in any language. It supersedes all previous translations and corrects all editions. The authors have done a splendid job in every way and have produced a work that will be useful for the duration of our lives and probably much longer."—Noel Swerdlow, University of Chicago and author of The Babylonian Theory of the Planets

"Berggren and Jones have made a difficult, detailed and challenging text far more accessible and have produced a work that will be the standard for many years to come. They have done a wonderful service to the study of a crucial text by one of the most important figures in the history of science. A pleasure to read."—Liba Taub, Cambridge University