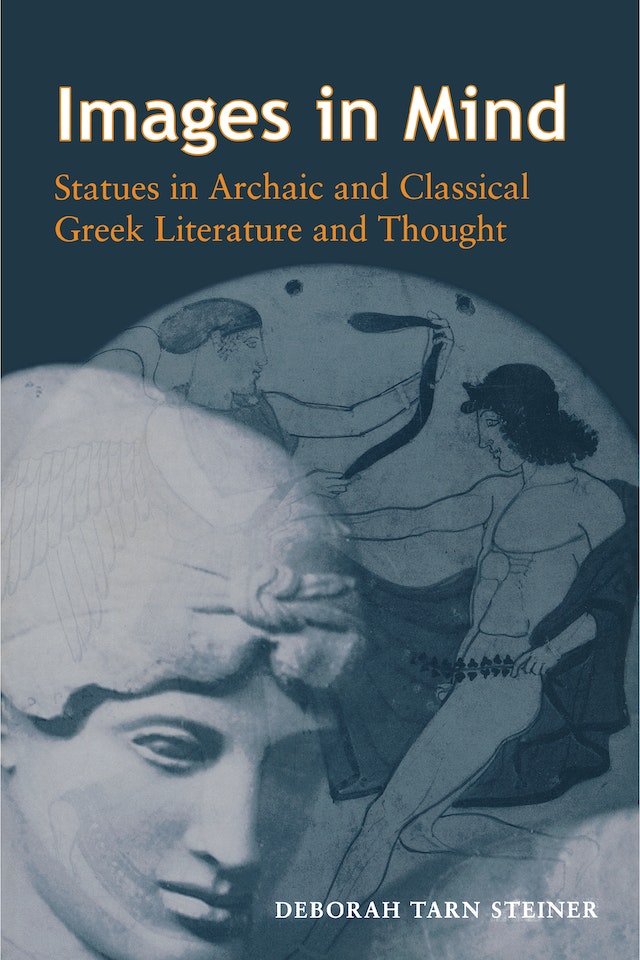 In archaic and classical Greece, statues played a constant role in people’s religious, political, economic, aesthetic, and mental lives. Evidence of many kinds demonstrates that ancient Greeks thought about — and interacted with — statues in ways very different from our own. This book recovers ancient thinking about statues by approaching them through contemporary literary sources. It not only shows that ancient viewers conceived of images as more operative than aesthetic, but additionally reveals how poets and philosophers found in sculpture a practice ”good to think with.”

Deborah Tarn Steiner considers how Greek authors used images to ponder the relation of a copy to an original and of external appearance to inner reality. For these writers, a sculpture could straddle life and death, encode desire, or occasion reflection on their own act of producing a text. Many of the same sources also reveal how thinking about statues was reflected in the objects’ everyday treatment. Viewing representations of gods and heroes as vessels hosting a living force, worshippers ritually washed, clothed, and fed them in order to elicit the numinous presence within.

By reading the plastic and verbal sources together, this book offers new insights into classical texts while illuminating the practices surrounding the design, manufacture, and deployment of ancient images. Its argument that images are properly objects of cultural and social — rather than purely aesthetic — study will attract art historians, cultural historians, and anthropologists, as well as classicists.

Deborah Tarn Steiner is Associate Professor of Classics at Columbia University. She is the author of The Crown of Song: Metaphor in Pindar, and The Tyrant's Writ: Myths and Images of Writing in Ancient Greece (Princeton).

"This book will be widely read and used, and makes a genuine contribution to the field, in part at least because it puts together so much otherwise disparate material. The whole is written with great care at the level of the sentence; the style is pellucid, highly articulate, and careful, without either flashiness or plodding worthiness. As with The Tyrant's Writ, the topic is very fashionable, and the book's themes will be of interest to a large group of scholars."—Simon Goldhill, Cambridge University

"This book offers many new insights and observations. The broad issue at hand is one of crucial significance to both philologists and art historians alike, and there is nothing like this treatment presently in print. It is indisputably a significant contribution to the field. No one could come away from reading it without having a deepened appreciation for the complexity of the construction of meaning in both ancient art and literature."—Mark Fullerton, Ohio State University