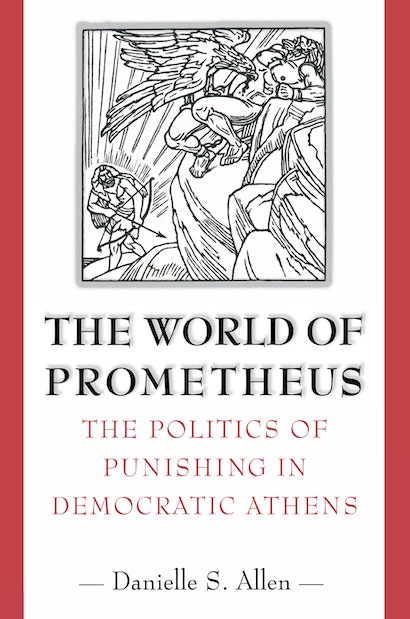 For Danielle Allen, punishment is more a window onto democratic Athens’ fundamental values than simply a set of official practices. From imprisonment to stoning to refusal of burial, instances of punishment in ancient Athens fueled conversations among ordinary citizens and political and literary figures about the nature of justice. Re-creating in vivid detail the cultural context of this conversation, Allen shows that punishment gave the community an opportunity to establish a shining myth of harmony and cleanliness: that the city could be purified of anger and social struggle, and perfect order achieved. Each member of the city — including notably women and slaves — had a specific role to play in restoring equilibrium among punisher, punished, and society. The common view is that democratic legal processes moved away from the “emotional and personal” to the “rational and civic,” but Allen shows that anger, honor, reciprocity, spectacle, and social memory constantly prevailed in Athenian law and politics.


Allen draws upon oratory, tragedy, and philosophy to present the lively intellectual climate in which punishment was incurred, debated, and inflicted by Athenians. Broad in scope, this book is one of the first to offer both a full account of punishment in antiquity and an examination of the political stakes of democratic punishment. It will engage classicists, political theorists, legal historians, and anyone wishing to learn more about the relations between institutions and culture, normative ideas and daily events, punishment and democracy.

Danielle S. Allen is Associate Professor in Classical Languages and Literatures, Political Science, and the Committee on Social Thought and the College at the University of Chicago. She is a 2001 recipient of a MacArthur Foundation fellowship.

"A very impressive debut, rich enough in arguments, approaches, theories, and facts that one can disagree with a lot of it and still find much which is useful and convincing."—James Davidson, London Review of Books

"Danielle Allen's book is a strikingly original contribution to classical Greek social and intellectual history and to the study of Greek legal practices. It also has crucial relevance for important debates within contemporary political and legal theory, including the practical implications of communitarianism and jury nullification."—Josiah Ober, Princeton University

"This is an original and refreshing study. . . . It allows us to reconsider contemporary issues, such as jury nullification and communitarianism, from a new perspective. Its range and depth of argument will make it a useful resource."—Craige Champion, Allegheny College