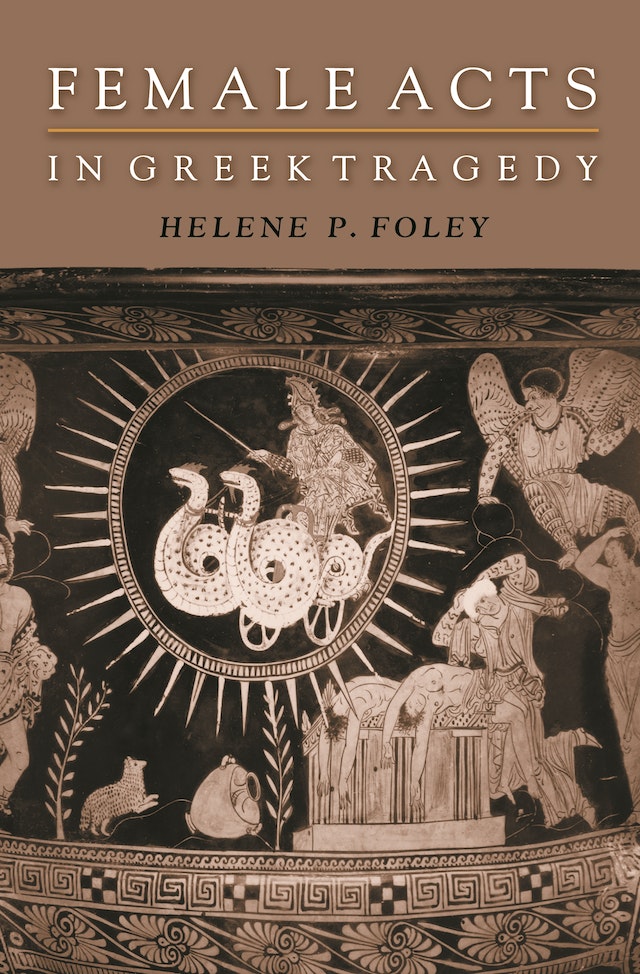 Although Classical Athenian ideology did not permit women to exercise legal, economic, and social autonomy, the tragedies of Aeschylus, Sophocles, and Euripides often represent them as influential social and moral forces in their own right. Scholars have struggled to explain this seeming contradiction. Helene Foley shows how Greek tragedy uses gender relations to explore specific issues in the development of the social, political, and intellectual life in the polis. She investigates three central and problematic areas in which tragic heroines act independently of men: death ritual and lamentation, marriage, and the making of significant ethical choices. Her anthropological approach, together with her literary analysis, allows for an unusually rich context in which to understand gender relations in ancient Greece.


This book examines, for example, the tragic response to legislation regulating family life that may have begun as early as the sixth century. It also draws upon contemporary studies of virtue ethics and upon feminist reconsiderations of the Western ethical tradition. Foley maintains that by viewing public issues through the lens of the family, tragedy asks whether public and private morality can operate on the same terms. Moreover, the plays use women to represent significant moral alternatives. Tragedy thus exploits, reinforces, and questions cultural clichés about women and gender in a fashion that resonates with contemporary Athenian social and political issues.

Helene P. Foley is Professor of Classics at Barnard College, Columbia University. She is the author of Ritual Irony: Poetry and Sacrifice in Euripides, coauthor of Women in the Classical World: Image and Text, and editor of Reflections of Women in Antiquity and of The Homeric Hymn to Demeter (Princeton).

"Innovative and accessible. . . . [Foley] combines wide coverage with nuance and detail. . . . Hers is the best argument you will find to the effect that Greek tragedy gives heroines a (limited) space from which to assert their private and public virtues alongside male vices and transgressions. This builds to a distinctive and carefully historicized vision of tragedy's role in Athens, not to mention its surprising contribution to modern debates about ethics and gender."—Jon Hesk, Times Literary Supplement

"[A] well-documented study of Greek tragedy from a feminisit perspective."—Choice

"This impressive work is noteworthy for its comprehensive scope and its lucid style. All those interested in an expanded understanding of ancient drama should benefit from this major study done by a very important scholar."—Mary-Kay Gamel, Theatre Journal

"Sensibility of thought and methodology characterize this work that will be valued by scholars, teachers, and students of Greek tragedy. . . . This study excels because of the author's firm grasp of the ancient texts and her willingness to embrace methodologies that do no violence to them."—John E. Thorburn, The Classical Outlook

"Foley offers new perspectives and complete presentations of several tragedy women. . . . This book may not be read in an afternoon. But every classics scholar should read it once and most will reread sections to consider again Foley's selected women."—Karelisa V. Hartigan, Religious Studies Review

"Helene Foley's book is exemplary in its use of a variety of approaches and it casts new light on both familiar and unfamiliar aspects of the tragic texts and Greek culture. Her treatment of myth, ritual, and dramatic plot, for example, is much richer and more nuanced than readings that have looked almost exclusively at the patriarchal aspects of the representation of women. Written in a fashion that is accessible to nonspecialists, this book will interest anthropologists, philosophers specializing in ethics, and scholars of gender studies—as well as classicists."—Donald J. Mastronarde, University of California, Berkeley

"An important book that will become the standard starting point for studying the representation of female characters in Greek tragedy. Many readers will be relieved to find that the family does after all provide opportunities for worthwhile moral agency on the part of its female members, and that Greek tragedy can be enjoyed and appreciated for its constructive critique, not its reinforcement, of classical Greek political and social inequities. This book should be read by specialists and general readers interested in drama, gender issues, and Greek civilization."—Mark Griffith, University of California, Berkeley

"This book will rank with Segal's Tragedy and Civilization as one of the most important works on tragedy in this century. The reading is nuanced and sophisticated and covers a wide range of texts while providing considerable social and historical context. The section on women as moral agents comprehensively treats a topic that has been almost entirely ignored in other works on women in tragedy."—Kirk Ormand, author of Exchange and the Maiden: Marriage in Sophoclean Tragedy