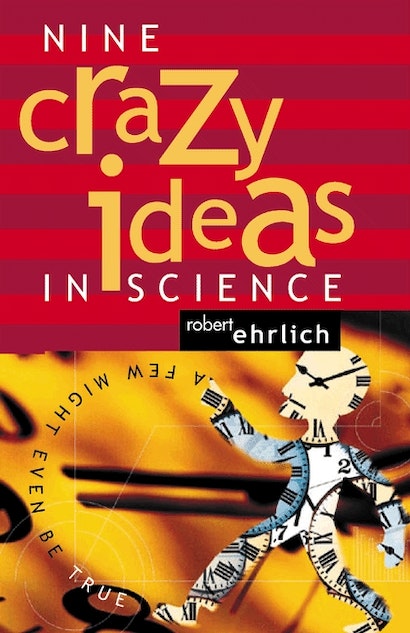 AIDS is not caused by HIV. Coal and oil are not fossil fuels. Radiation exposure is good for you. Distributing more guns reduces crime. These ideas make headlines, but most educated people scoff at them. Yet some of science’s most important concepts-from gravity to evolution-have surfaced from the pool of crazy ideas. In fact, a good part of science is distinguishing between useful crazy ideas and those that are just plain nutty. In this book, a well-known physicist with an affinity for odd ideas applies his open mind to nine controversial propositions on topical subjects. Some, it turns out, are considerably lower on the cuckoo scale than others.


Robert Ehrlich evaluates, for the general reader or student, nine seemingly far-out propositions culled from physics, biology, and social science. In the process, he demonstrates in easy-to-understand terms how to weigh an argument, judge someone’s use of statistics, identify underlying assumptions, and ferret out secret agendas. His conclusions are sometimes surprising. For instance, he finds that while HIV does cause AIDS and the universe almost certainly started with a big bang, our solar system could have two suns, faster-than-light particles might exist, and time travel can’t be ruled out as mere science fiction.


Anyone interested in unorthodox ideas will get a kick out of this book. And, as a fun way of learning how to think like a scientist, it has enormous educational value. Of course, only time will tell whether any of these nine ideas will be the next continental drift — the now orthodox account of the Earth’s geology that was for years just a crazy idea.

Robert Ehrlich is Professor of Physics at George Mason University. His books include Why Toast Lands Jelly-Side Down and Turning the World Inside Out and 174 Other Simple Physics Demonstrations (both Princeton).

"Modern science, especially physics, is replete with outlandish ideas that defy common sense and intuition. It is almost impossible for the non-scientist to discriminate between the legitimately weird and the outright crackpot. . . . Robert Ehrlich has assembled a fascinating collection of apparently crazy ideas, and subjected them to careful analysis. . . . Ehrlich points out how statistics can be misleadingly presented . . . and how the distinction between effects that are causally related and those that are merely correlated often gets blurred."—Paul Davies, Nature

"Clear and lively. . . . Ehrlich . . . is entertaining, but the genuine value of his book lies in the analyses. . . . An important addition to an underpopulated genre of science books: It critically examines both sides of interesting, important, and unsettled arguments."—William H. Ingham, Physics Today

"Physicist Robert Ehrlich has come up with a lovely idea for a discussion of how science works. His book is a light-hearted treatment of bizarre-but-not-manifestly-impossible ideas that have burdened scientific literature over the past decades. What is valuable is that Ehrlich uses scientific methodology to subject these ideas (not all wrong!) to critical examination. He has a low-key, pleasing style and uses no math."—Leon Lederman, 1988 Nobel Laureate in Physics

"At any time, there are ideas at the fringe of science, some too crazy to be true, some not crazy enough. Physicist Robert Ehrlich gives a levelheaded tour of today's frontiers-and sticks his neck out by rating each idea he considers. You surely won't agree with him, but you'll have fun trying to figure out why."—James S. Trefil, author of A Scientist in the City and Other Worlds

"Ehrlich's book puts life into a novel idea: a fresh view of the most controversial scientific notions of our time, which are always intriguing, often interesting, occasionally seemingly impossible, and sometimes downright fool-hardy ideas. It's informative, entertaining, and provocative reading, inviting the reader to wonder how the scientific mind can differ so much."—Robert C. Gallo, MD, Director, Institute of Human Virology, University of Maryland