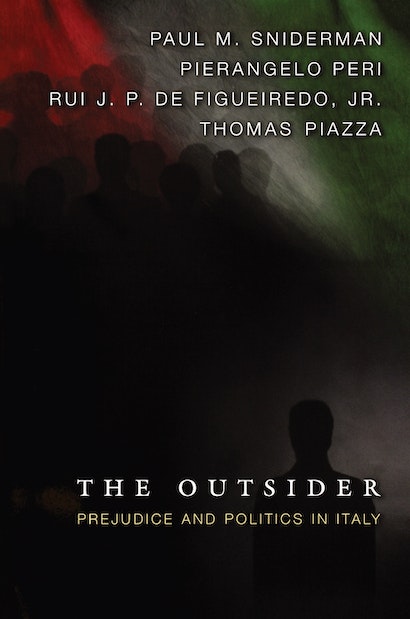 One of the most wide-ranging studies of prejudice undertaken in a decade, The Outsider combines new research methods and rich analysis to upend many of our assumptions about prejudice. Noting that hostility toward immigrants has been on the rise throughout Western Europe, Paul Sniderman and his team conduct the first study of prejudice in Italy and offer insights applicable to nearly all countries worldwide. The study of prejudice, they argue, has been both stimulated and limited by tensions among partial theories. Prejudice and group conflict are said to be rooted in the psychological makeup of individuals, or alternatively, to spring from real competition over material goods or social status, or yet again, to follow in the wake of a quest for identity. It is the distinctive effort of The Outsider to develop a unified theory of prejudice integrating personality, realistic conflict, and social identity approaches.


Drawing on computer-assisted interviewing, this book focuses on Italy partly because it has experienced two different waves of immigration, from Northern Africa and Eastern Europe, and thus allows one to consider to what extent the color of immigrants’ skin imposes a special burden of prejudice. Italy is also an apt site for the study of intolerance because of long-standing prejudices that have existed internally, between Northern and Southern Italians. The book’s findings show that any point of difference — color, nationality, or language — marks the immigrant as an outsider. The fact of difference, not the particular mode of difference, is crucial. Moreover, the general election of 1994 provided a rare opportunity to investigate the political impact of prejudice when the party system was itself in the process of transformation. The authors uncover a potential line of cleavage: rather than prejudice being concentrated on the political right, it has a wide following among the less educated of the political left.


Analyzing the contributions of personality, social-structural factors, and political orientation to the wave of intolerance toward immigrants, The Outsider offers unprecedented insights into the phenomenon of prejudice and its link to politics.

Paul M. Sniderman is Professor of Political Science at Stanford University. A Fellow of the American Academy of Arts and Sciences, he is the author of the widely influential The Scar of Race, coauthored with Thomas Piazza, and Reaching Beyond Race, among other books. Pierangelo Peri is Titular Lecturer of Methodology and Technics of Social Research at the University of Trento. Rui J. P. de Figueiredo, Jr., is Assistant Professor of Business and Public Policy at the Haas School of Business and is Assistant Professor in the Department of Political Science at the University of California, Berkeley. Thomas Piazza is Senior Survey Statistician at the Survey Research Center at the University of California, Berkeley.

"A timely, provocative analysis of the sources of political prejudice in contemporary Italy."—Choice

"The timing of Sniderman and his colleagues is impeccable: Just as right-wing extremism, driven by xenophobia, reaches the top of the European agenda (and not only in Austria), they bring to fruition this important six-year study of prejudice toward immigrants in Italy. Students of both Europe and of tolerance will be especially interested in the argument that the Left is especially vulnerable to shocks that increase prejudice."—Robert D. Putnam

"The Outsider makes a landmark contribution to our understanding of prejudice. Analysts of public opinion, electoral behavior, party competition, and ethnicity in the United States and Europe will find the book compelling and provocative. The authors integrate and reconcile rival theoretical approaches, and they present empirical findings of great import. They bring methodological advances pioneered in the study of racism in the United States to the study of prejudice in Europe. And their discussion of the broader implications of the research is magisterial. The book does more than trace the roots of hostility toward immigrants in Italy: it illuminates the bases of democratic political life. The Outsider is an extraordinarily satisfying work of social science."—Carol Mershon, University of Virginia

"The Outsider is an extraordinary book that will be of interest to students of politics as well as race and ethnicity. It bears comparison to Robert Putnam's Making Democracy Work."—Mabel Berezin, University of California, Los Angeles