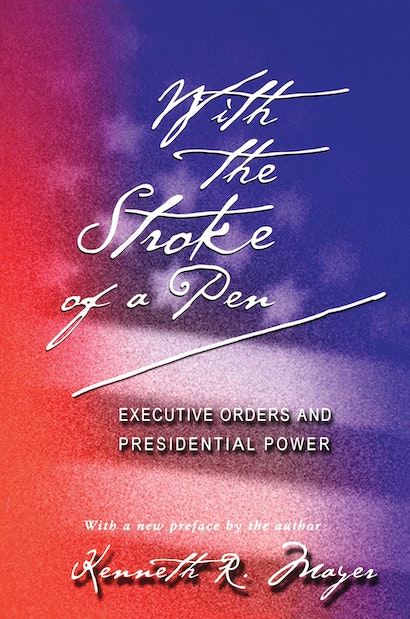 The conventional wisdom holds that the president of the United States is weak, hobbled by the separation of powers and the short reach of his formal legal authority. In this first-ever in-depth study of executive orders, Kenneth Mayer deals a strong blow to this view. Taking civil rights and foreign policy as examples, he shows how presidents have used a key tool of executive power to wield their inherent legal authority and pursue policy without congressional interference.

Throughout the nation’s life, executive orders have allowed presidents to make momentous, unilateral policy choices: creating and abolishing executive branch agencies, reorganizing administrative and regulatory processes, handling emergencies, and determining how legislation is implemented. From the Louisiana Purchase to the Emancipation Proclamation, from Franklin Roosevelt’s establishment of the Executive Office of the President to Bill Clinton’s authorization of loan guarantees for Mexico, from Harry Truman’s integration of the armed forces to Ronald Reagan’s seizures of regulatory control, American presidents have used executive orders (or their equivalents) to legislate in ways that extend far beyond administrative activity.

By analyzing the pattern of presidents’ use of executive orders and the relationship of those orders to the presidency as an institution, Mayer describes an office much more powerful and active than the one depicted in the bulk of the political science literature. This distinguished work of scholarship shows that the U.S. presidency has a great deal more than the oft-cited “power to persuade.”

Kenneth R. Mayer is Professor of Political Science at the University of Wisconsin-Madison. He is the coauthor of The Dysfunctional Congress? The Individual Roots of an Institutional Dilemma and the author of The Political Economy of Defense Contracting.

"A lucid, historical, and topical discussion of the executive order. . . . [Mayer] makes some useful corrections to the conventional wisdom about the subject. . . . [The book] is superbly done, can be read by undergraduates or advanced scholars alike, and will be invaluable for reference."—Richard M. Pious, Presidential Studies Quarterly

"While the book is aimed at academics and presumes knowledge of contemporary debates on the power of the presidency, it is not too abstruse for the current events-minded reader. . . . And if you're a journalist or author researching the office of the presidency, it's essential."—Lauren Mandell, NationalJournal.com

"Mayer has written the definitive contemporary account of the presidential power of issuing executive orders. The detailed historical coverage and analysis make this volume the best single reference source on the topic."—Choice

"A valuable, systematic, and insightful examination of an important presidential power. In the wake of terrorist threats and economic recession, With the Stroke of a Pen might well lead one to expect significant executive orders and perhaps other unilateral presidential action."—Karen M. Hult, The Journal of Politics

"No doubt analysts will continue to debate the nature of executive power, but Mayer has demonstrated convincingly that 'executive orders matter.' His book is well worth reading by anyone interested in the history of the presidency, the nature of governmental authority, or leadership in general."—Michael A. Palmer, American Historical Review

"A book that should be of keen interest to anyone wishing to learn about how executive orders fit into the larger landscape of the institutional presidency."—George A. Krause, American Political Science Review

"This is one of the most important books on the presidency that has come out in the last ten years. . . . It stands as the best book to date on this important source of presidential power. I recommend this book to a wide audience."—David E. Lewis, Congress and the Presidency

"Ken Mayer's book represents a penetrating and comprehensive examination of the president's power to issue executive orders. In what will be recognized as the authoritative work on the subject, Mayer brings a powerful and illuminating mind to an important, controversial, and, yet, understudied topic. This is an excellent work, and it will be highly regarded and widely read."—David Gray Adler, Idaho State University

"This book is exceptionally well researched and presented. It contains a wealth of data and has virtually no competitors. . . . A truly distinguished work."—Louis Fisher, author of American Constitutional Law