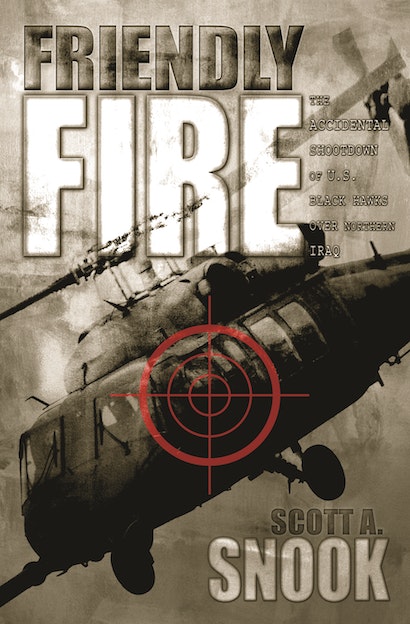 On April 14, 1994, two U.S. Air Force F-15 fighters accidentally shot down two U.S. Army Black Hawk Helicopters over Northern Iraq, killing all twenty-six peacekeepers onboard. In response to this disaster the complete array of military and civilian investigative and judicial procedures ran their course. After almost two years of investigation with virtually unlimited resources, no culprit emerged, no bad guy showed himself, no smoking gun was found. This book attempts to make sense of this tragedy — a tragedy that on its surface makes no sense at all.


With almost twenty years in uniform and a Ph.D. in organizational behavior, Lieutenant Colonel Snook writes from a unique perspective. A victim of friendly fire himself, he develops individual, group, organizational, and cross-level accounts of the accident and applies a rigorous analysis based on behavioral science theory to account for critical links in the causal chain of events. By explaining separate pieces of the puzzle, and analyzing each at a different level, the author removes much of the mystery surrounding the shootdown. Based on a grounded theory analysis, Snook offers a dynamic, cross-level mechanism he calls “practical drift” — the slow, steady uncoupling of practice from written procedure — to complete his explanation.


His conclusion is disturbing. This accident happened because, or perhaps in spite of everyone behaving just the way we would expect them to behave, just the way theory would predict. The shootdown was a normal accident in a highly reliable organization.

United States Army LTC Scott A. Snook serves as an Academy Professor in the Department of Behavioral Sciences & Leadership at the United States Military Academy. He also directs West Point's Center for Leadership and Organizations Research.

"The reader will be fascinated. . . . The conclusion is eye-opening and the 'lessons learned' are insightful. . . . A lucid and well-argued book that is a must-read for anyone seeking to comprehend the complexity of fratricide."—John Davis, Air Power History

"Friendly Fire is a deeply intriguing analysis of a highly complex incident that resulted in needless deaths. . . . Drawing on an extensive knowledge of systems theory and organizational behavior, [Snook] weaves an account of an organization on the edge of chaos, a nearly deterministic system ultimately responsible for the resultant loss of life. His conclusions are as disturbing as they are fascinating. . . . Snook paints a disconcerting picture of the potential pitfalls of organizational complacency that every military professional should take to heart. . . . A concise, well-written account of human tragedies. . . . Snook presents a thoroughly analytical, yet exceptionally unambiguous, narrative of the events that ultimately led to the deaths of 26 peacekeepers. Any research into this incident would be incomplete without the information [this] author provide[s]."—Steven Leonard, Military History

"Scott Snook has built a clear case from highly-detailed information. Putting all the data in one place, with numerous 'inside' examples and quotes, will stimulate many organizational theorists. The book is a model of organizational analysis and application of theory at multiple levels, including an ability to reveal the gaps in theory without undermining the theoretical analysis."—John S. Carroll, MIT Sloan School of Management

"A provocative book that can teach all of us about much more than friendly fire. It is an ideal teaching text with great subject, a fascinating thesis, lots of details and much to ponder and discuss."—Brig. Gen Creighton W. Abrams, U.S. Army Ret., Army