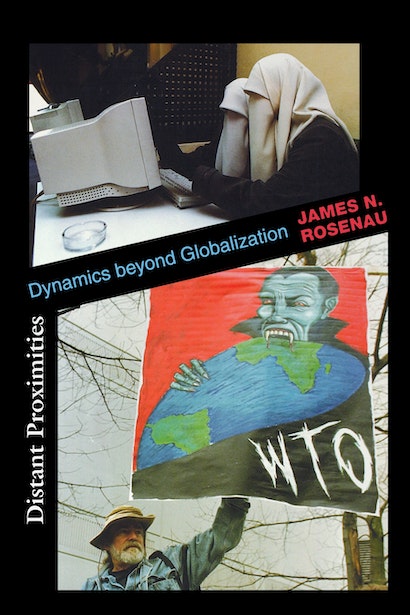 Has globalization the phenomenon outgrown “globalization” the concept? In Distant Proximities, one of America’s senior scholars presents a work of sweeping vision that addresses the dizzying anxieties of the post-Cold War, post-September 11 world. Culminating the influential reassessment of international relations he began in 1990 with Turbulence in World Politics, James Rosenau here undertakes the first systematic analysis of just how complex these profound global changes have become. Among his many conceptual innovations, he treats people-in-the-street as well as activists and elites as central players in what we call “globalization.”


Deftly weaving striking insights into arresting prose, Rosenau traces the links and interactions between people at the individual level and institutions such as states, nongovernmental organizations, and transnational corporations at the collective level. In doing so he masterfully conveys how the emerging new reality has unfolded as events abroad increasingly pervade the routines of life at home and become, in effect, distant proximities.


Rosenau begins by distinguishing among various local, global, and private “worlds” in terms of their inhabitants’ orientations toward developments elsewhere. He then proceeds to cogently analyze how the residents of these worlds shape and are shaped by the diverse collectivities that crowd the global stage and that sustain such issues as human rights, corruption, the global economy, and global governance.


Throughout this richly imaginative, fluidly written book, Rosenau examines how anti-globalization protests and the terrorist attacks on America amount to quintessential distant proximities. His book is thus a pathbreaking inquiry into the dynamics that lie beyond globalization, one that all thoughtful observers of the world scene will find penetrating and provocative.

James N. Rosenau is University Professor of International Affairs at The George Washington University. His numerous books include Turbulence in World Politics (Princeton) and Along the Domestic-Foreign Frontier.

"In this sweeping study of global change, Rosenau argues that the world is undergoing an epochal transformation driven by relentless scientific and technological advances that collapse time and distance and alter the dimensions of political space. . . . Rosenau convincingly illustrates the increasing complexity of global relationships."—Foreign Affairs

"James Rosenau's book is no doubt his magnum opus, providing a detailed, multi-faceted analysis of globalization's complexities in an ever-shrinking world of uncertainty, change, and contradiction."—Cecilia Ann Winters, Journal of Economic Issues

"The recently bygone bipolar world of the Cold War looks simple in comparison to the complexities of today's globalizing era. Professor James Rosenau, in this wide-ranging masterwork of conceptual synthesis, develops a new vocabulary—distant proximities, fragmegration, glocalization—to help us explore the contradictory impact on our times of worldwide economic and electronic integration; religious, ethnic, and tribal hatreds; information overload; and terrorism. Individuals, communities, nation-states, and international structures are all struggling to accommodate the dynamics of today's unprecedented social and economic change. Rosenau's powerful yet nuanced analysis encompasses the agenda of our times—income disparities, human rights violations, corruption, high tech violence—and he leaves us pondering whether global and community governance will be able to cope with the challenges of a fragmegrative world."—Richard H. Solomon, President, U.S. Institute of Peace

"For some years now, James N. Rosenau has been writing imaginatively about the systemic role of empowered individuals on the world stage, utilizing as his organizing principle possible complementarities in opposing tendencies—as in the title of this latest book. But never before has his work seemed so relevant to this morning's headline while probing so deeply into the very foundations of social space/time. And behind it all stands an enduring commitment to open-minded inquiry: 'checkableupableness,' Rosenau calls it. In a discipline consumed by Methodenstreite, here is an important book that at once soars above, and uncovers powerful fields of forces beneath, the standard fare."—John Gerard Ruggie, Harvard University

"Like so much of Rosenau's work, Distant Proximities is enormously thoughtful and insightful. It pushes the way we think about global politics dramatically beyond the traditional or eurocentric model of states in a state system and, though highly abstract, actually deals with issues that matter to most people in today's globalizing world. It is classically Rosenau."—Richard W. Mansbach, Iowa State University, author of Politics, Authority, Identity, and Change

"This book contains all of Rosenau's strengths. It is imaginative—replete with novel insights, concepts, and ideas. It looks to the future rather than to the past. It is based on a very broad literature that goes far beyond normal disciplinary confines. Rosenau always searches for the new and interesting, and for those anomalies that set the mind to look for explanations. He takes his own advice to attempt 'theoretical jailbreaks,' and to dare to tread where others are more timid. The book is very well written, and its author is to be applauded for getting his readers to 'think outside the box.'"—Kal Holsti, University of British Columbia, author of The State, War, and the State of War