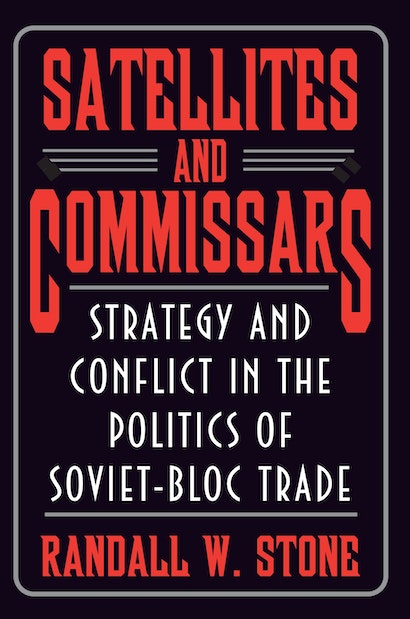 Why did the Soviet Union squander the political leverage afforded by its trade subsidy to Eastern Europe? Why did Soviet officials fail to bargain with resolve, to link subsidies to salient political issues, to make credible commitments, and to monitor the satellites’ policies? Using an unprecedented array of formerly secret documents housed in archives in Moscow, Warsaw, and Prague, as well as interviews with former Communist officials across Eastern Europe, Randall Stone answers these questions and others that have long vexed Western political scientists.


Stone argues that trade politics revolved around the incentives created by distorted prices. The East European satellites profited by trading on the margin between prices on the Western market and those in the Soviet bloc. The Soviet Union made numerous attempts to reduce its implicit trade subsidy and increase the efficiency of the bloc, but the satellites managed consistently to outmaneuver Soviet negotiators. Stone demonstrates how the East Europeans artfully resisted Soviet objectives.


Stone draws upon recent developments in bargaining and principal-agent theory, arguing that the incentives created by domestic institutions weakened Soviet bargaining strategies. In effect, he suggests, perverse incentive structures in the Soviet economy were exported into Soviet foreign policy. Furthermore, Stone argues, incentives to smother information were so deeply entrenched that they frustrated numerous attempts to reform Soviet institutions.

Randall W. Stone is Assistant Professor of Political Science at the University of Rochester. The dissertation on which this book is based won the Charles Sumner Prize from Harvard University and the 1994 Helen Dwight Reid Award from the American Political Science Association. He is also the author of Lending Credibility (Princeton).

"Randall Stone provides a theoretically sophisticated and empirically rich study. . . . Masterfully linking theory and case study, Stone provides a provocative analysis that challenges a number of prevailing views. . . . Skeptics may dispute Stone's conclusions but are less likely to question the quality of his analysis and research. Indeed, his careful study has set the terms for debate and an agenda for further research."—Philip Roeder, American Political Science Review

"A major achievement in the field of Soviet studies. It is an original, carefully documented, and theoretically valuable contribution to the field. Moreover, this book effectively crosses disciplines of comparative political economy and international relations, making it essential reading both for theorists concerned with the process of integration and for students of Soviet-East European relations."—Alan Rousso, Political Science Quarterly

"One of the best-researched analyses of trade between members of the Council for Mutual Economic Assistance. . . . This is a book well worth reading."—Dale R. Herspring, Annals of the American Academy of Political and Social Science