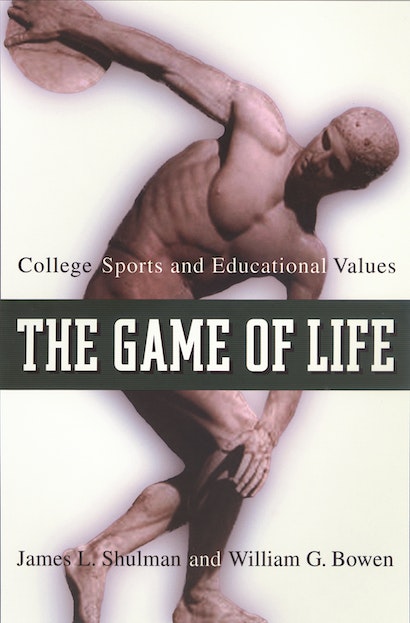 The President of Williams College faces a firestorm for not allowing the women’s lacrosse team to postpone exams to attend the playoffs. The University of Michigan loses $2.8 million on athletics despite averaging 110,000 fans at each home football game. Schools across the country struggle with the tradeoffs involved with recruiting athletes and updating facilities for dozens of varsity sports. Does increasing intensification of college sports support or detract from higher education’s core mission?


James Shulman and William Bowen introduce facts into a terrain overrun by emotions and enduring myths. Using the same database that informed The Shape of the River, the authors analyze data on 90,000 students who attended thirty selective colleges and universities in the 1950s, 1970s, and 1990s. Drawing also on historical research and new information on giving and spending, the authors demonstrate how athletics influence the class composition and campus ethos of selective schools, as well as the messages that these institutions send to prospective students, their parents, and society at large.


Shulman and Bowen show that athletic programs raise even more difficult questions of educational policy for small private colleges and highly selective universities than they do for big-time scholarship-granting schools. They discover that today’s athletes, more so than their predecessors, enter college less academically well-prepared and with different goals and values than their classmates — differences that lead to different lives. They reveal that gender equity efforts have wrought large, sometimes unanticipated changes. And they show that the alumni appetite for winning teams is not — as schools often assume — insatiable. If a culprit emerges, it is the unquestioned spread of a changed athletic culture through the emulation of highly publicized teams by low-profile sports, of men’s programs by women’s, and of athletic powerhouses by small colleges.


Shulman and Bowen celebrate the benefits of collegiate sports, while identifying the subtle ways in which athletic intensification can pull even prestigious institutions from their missions. By examining how athletes and other graduates view The Game of Life — and how colleges shape society’s view of what its rules should be — Bowen and Shulman go far beyond sports. They tell us about higher education today: the ways in which colleges set policies, reinforce or neglect their core mission, and send signals about what matters.

James L. Shulman collaborated on The Shape of the River (Princeton), is Financial and Administrative Officer at the Andrew W. Mellon Foundation, and directs the Foundation's College and Beyond research.William G. Bowen (1933-2016) was president emeritus of The Andrew W. Mellon Foundation and Princeton University and founding chairman of ITHAKA.. His many books included The Shape of the River: Long-Term Consequences of Considering Race in College and University Admissions (with Derek Bok) (Princeton).

"The conclusions are truly depressing and significant. . . . The Game of Life is the most important sports book written in years."—Frank Deford, Sports Illustrated

"A landmark study that should be welcomed by college presidents. . . These findings breathe new and potentially subversive life into old doubts about the role of highly competitive collegiate athletics. . ."—John Hoberman, The Wall Street Journal

"Makes a compelling case that athletics has utterly warped not only big colleges, but most of education, and in ways that go far beyond the usual allegations of diverting resources and spreading cynicism."—Marc Fisher, The Washington Post

"[The Game of Life] does not assign a catalog of sins to sports-minded colleges and universities as does Professor Sperber's book. But it argues compellingly that the influence of intercollegiate sports has greatly intensified in recent years."—William H. Honan, The New York Times

"The Shulman-Bowen data show that recruited athletes not only enter selective colleges with weaker academic records than their classmates as a whole, but that, once in college, they consistently underperform academically. . . .Moreover, they say, the academic standing of athletes relative to their classmates has deteriorated markedly in recent years."—Edward B. Fiske, New York Times

"A fascinating and important new book about the divergence of college sports and educational values."—Jane Eisner, Philadelphia Enquirer

"The Game of Life will have a profound effect on the national debate about professionalized college sports."—William C. Dowling, Newark Star Ledger

"Perhaps the most surprising findings in The Game of Life are that elite colleges put more emphasis on athletics than most of us would have suspected."—Andrew Hacker, New York Review of Books

"Shulman and Bowen have done the world a great service by asking some difficult questions about some obvious issues and tenaciously digging out more reliable answers than anyone hitherto has come up with."—Alan Ryan, Times Higher Education Supplement

"Shulman and Bowen, both first-rate scholars, thoughtfully and methodically mine a rich database, providing an inside view of current practices and outcomes, and of how the system has evolved over half a century. . . . This volume . . . will attract a large audience; it should cause college trustees, administrators, faculty, alumni, state legislators, families, and sports fans everywhere to rethink their own values and decisions."—Choice

"What Shulman and Bowen add to the discussion is evidence that, with the quasi professionalization of college sports in recent years, student athletes belong more and more to an academic subculture in which superior intellectual performance is rare and not particularly valued. The old image of the athlete emerging from college intellectually as well as physically tested seems less and less a reality than a pleasant myth."—Andrew Delbanco, The New York Times Book Review

"College athletics have changed dramatically over the past fifty years. The authors present insightful research that is far more credible than the usual anecdotal commentaries on such topics. They document the increasing specialization by athletes, the effects of the relatively rapid evolution of women's participation, and the way that college sports are deeply intertwined with the ways that secondary and primary schools approach athletics. The Game of Life captures how these dynamics have had a profound effect on the current relevance of athletics to the academy and places these issues of significance squarely on the fifty yard line for college presidents and trustees. The question is will they be willing (or able) to accept the challenge?"—Richard W. Kazmaier, Jr., 1951 Heisman Trophy Winner, Member of the Knight Commission in Intercollegiate Athletics

"This is an excellent addition to the sports-education literature and will have a broad appeal. The set of issues Shulman and Bowen lay out are important and timely. That they base their conclusions on solid empirical work from an excellent database and provide both contemporary and longitudinal perspectives are added bonuses."—Allen Sanderson, University of Chicago

"This path-breaking study of intercollegiate athletics is rich in detail, long on perspective and enlightening in insights and conclusions. Shulman and Bowen have tested-and refuted-many of the popular assumptions concerning intercollegiate athletics with a pervasive body of empirical data spanning over twenty years. They document the increasing tensions, if not conflict, between athletics and the academic mission of institutions of higher education. Moreover, the study reveals that many of the same issues that bedeviled 'big time' intercollegiate athletics are now manifested in women's athletics and the programs of Ivy League and smaller, liberal arts institutions. No starry-eyed idealists, the authors recognize the complexity and sensitivity of the issues involved but offer a set of propositions to begin the task of restoring balance between academic values and the appetites of intercollegiate athletics. This book should command the attention of university presidents and trustees and all those fans and alumni who hope to cheer their teams to victory."—Arnold R. Weber, President Emeritus, Northwestern University