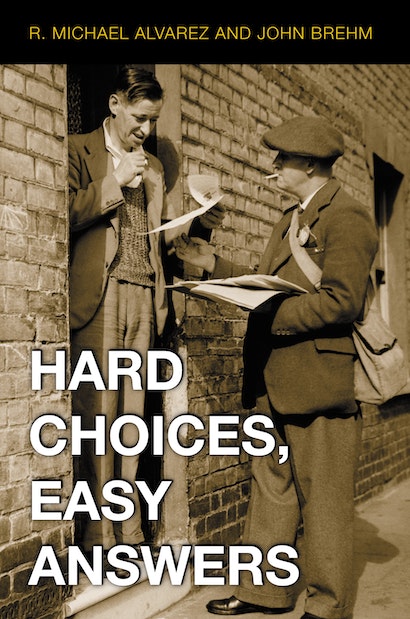 Those who seek to accurately gauge public opinion must first ask themselves: Why are certain opinions highly volatile while others are relatively fixed? Why are some surveys affected by question wording or communicative medium (e.g., telephone) while others seem immune? In Hard Choices, Easy Answers, R. Michael Alvarez and John Brehm develop a new theory of response variability that, by reconciling the strengths and weaknesses of the standard approaches, will help pollsters and scholars alike better resolve such perennial problems. Working within the context of U.S. public opinion, they contend that the answers Americans give rest on a variegated structure of political predispositions — diverse but widely shared values, beliefs, expectations, and evaluations.


Alvarez and Brehm argue that respondents deploy what they know about politics (often little) to think in terms of what they value and believe. Working with sophisticated statistical models, they offer a unique analysis of not just what a respondent is likely to choose, but also how variable those choices would be under differing circumstances. American public opinion can be characterized in one of three forms of variability, conclude the authors: ambivalence, equivocation, and uncertainty. Respondents are sometimes ambivalent, as in attitudes toward abortion or euthanasia. They are often equivocal, as in views about the scope of government. But most often, they are uncertain, sure of what they value, but unsure how to use those values in political choices.

"A provocative and important statement about the nature and functioning of mass opinion. . . . Alvarez and Brehm bring a sophisticated methodological arsenal to bear on enduring questions of public opinion. They have produced an invaluable study of the structural underpinnings of political attitudes, one that is deserving of serious consideration from a broad range of social scientists."—Howard Lavine, Perspectives on Politics

"Hard Choices, Easy Answers offers a strikingly original and rigorous theory of public opinion built upon the interaction between psychological predispositions and political information. In addition to providing a refined portrait of the electorate's policy preferences, Alvarez and Brehm compare elites and masses, distinguish between individual and collective opinion, develop methods to interpret the variability of opinions, and draw lessons for theories of political representation—a total package that significantly advances our understanding of attitude formation, belief systems, and survey responses."—Dennis Chong, Northwestern University

"Hard Choices, Easy Answers is a very attractive book that has taught me a good deal. It treats numerous topics in public opinion research, but the underlying theme is the wavering in people's minds when they are asked their political views. Anyone concerned with these topics will have to consult the studies included here. This book—whose authors are smart, prominent, productive scholars—will draw considerable attention."—Christopher Achen, University of Michigan

A Roadmap of the Technical Appendices