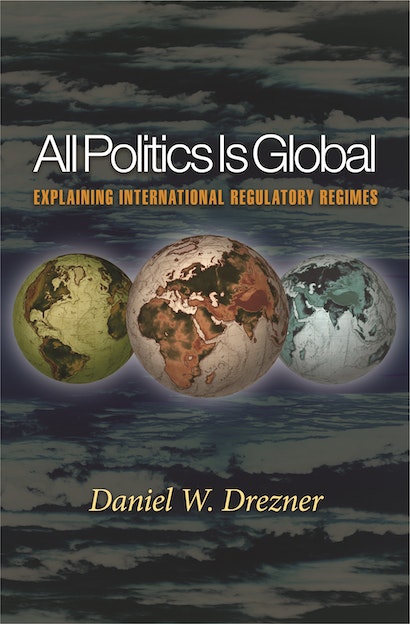 Has globalization diluted the power of national governments to regulate their own economies? Are international governmental and nongovernmental organizations weakening the hold of nation-states on global regulatory agendas? Many observers think so. But in All Politics Is Global, Daniel Drezner argues that this view is wrong. Despite globalization, states — especially the great powers — still dominate international regulatory regimes, and the regulatory goals of states are driven by their domestic interests.


As Drezner shows, state size still matters. The great powers — the United States and the European Union — remain the key players in writing global regulations, and their power is due to the size of their internal economic markets. If they agree, there will be effective global governance. If they don’t agree, governance will be fragmented or ineffective. And, paradoxically, the most powerful sources of great-power preferences are the least globalized elements of their economies.


Testing this revisionist model of global regulatory governance on an unusually wide variety of cases, including the Internet, finance, genetically modified organisms, and intellectual property rights, Drezner shows why there is such disparity in the strength of international regulations.

Daniel W. Drezner is professor of international politics at the Fletcher School of Law and Diplomacy at Tufts University. He is the author of U.S. Trade Strategy and The Sanctions Paradox and has been published widely in scholarly journals as well as the New York Times and the Wall Street Journal. He is a regular contributor to Newsweek International and NPR's Marketplace. He keeps a daily Weblog at www.danieldrezner.com.

"Rewarding. . . . Mr. Drezner . . . finds that the challenges of the future will be increasingly transnational. As globalization intensifies, the rewards for coordination will increase as well."—Economist

"Important.... Drezner shows that it is control of their own large domestic markets that give major states the ability to wield power in the global economy. His main contribution, however, is to explode a popular notion of globalization and thereby to set an agenda for the study of global regulatory politics."—G. John Ikenberry, Foreign Affairs

"All politics is global is a highly readable, authoritative, and well-investigated piece of political science literature on the globalization-global governance nexus. The explicit strength of the book is the logical and consistent development of the theory of regulatory outcomes, as well as the rigorous review of the scholarly literature. In this respect, it is strongly recommended to advanced graduate and doctoral students interested in the setting-up of game-theoretical models. . . . [T]he detailed case studies enhance the book's attractiveness for a broader readership."—Jale Tosun, Cambridge Review of International Affairs

"Among the many strengths of the book lie Drezner's skill in developing a clear and cogent analysis of state power in the global economy and the meticulous way he develops his argument for the key role state preference continues to play in international regulatory regimes. . . . Drezner never wearies in his task of refining our understanding of international regulation and in providing a more lucid insight into the politics of great power preference. The result is a book that challenges popular notions of globalization by placing the power and interests of governments back into the centre stage of debate."—Stephen G. Hughes, International Affairs

"All Politics is Global is a more than just a welcome contribution to current international relations scholarship. . . . Drezner takes a fresh look at the role of the powerful states in governing the world economy. Using simple game-theory, he provides a convincing explanation for why the great powers (the US and the EU) have not lost their influential role. In doing so, the book makes a strong case against a growing literature in international relations that attributes a significant degree of agency to international organizations or transnational private actors in shaping international regulatory outcomes."—World Trade Review

"Drezner makes an important contribution to the literature by bringing greater focus to the regulatory side of global governance in a small book that is well worth reading. . . . Drezner is to be credited for bringing a much needed discussion about the global politics of the regulatory state to the forefront of International Relations theory and practice."—Rex B. Hughes, International Affairs

"This is a detailed, scholarly book that explicates the arcane aspects of regulatory agreements. It won't crack the popular market. However, it will percolate and influence because it also explains quite well the 'big picture' elements of global trade and global regulation."—Austin Bay, Time Record News

"In All Politics Is Global, Daniel Drezner argues that states clearly retain the ability to influence and direct the world economy. He shapes his argument with clear and convincing points that he applies to areas ranging from international finance to the Internet. Despite globalization, he argues, the desires and capabilities of national states continue to define the contours of the world economic order. This careful study will be relevant to all those interested in understanding the interplay of international markets and international politics."—Jeffry Frieden, Harvard University

"This important contribution to international relations theory will be of great interest to public policy practitioners—civil servants and their political masters—who find themselves today increasingly embroiled in international disputes over domestic issues. Drezner addresses with insight and in detail a welter of contemporary issues such as Internet governance and privacy, international finance and financial crises, genetically modified organisms, and the conflict between intellectual property and public health."—Kenneth W. Dam, former U.S. Deputy Secretary of State and Deputy Secretary of the Treasury

"Daniel Drezner takes on a complicated question: who, if anyone, regulates the global economy? His answer: states with large markets, when those states act in concert. Drezner's study is theoretically and methodologically sophisticated. His use of case studies is honest and convincing. Along the way, there is a rich review of many literatures. All Politics Is Global shows the 'hows' and 'whys' of great-power regulation, and explains why it sometimes fails. Along the way, we learn a lot about the roles and futures of nonstate actors in the global economy. All Politics Is Global adds up to a major contribution to the literature of international political economy."—Henry S. Bienen, President of Northwestern University

"The beauty and attraction of Drezner's work on global regulation stems from its bold attempt to apply classic international relations theory to a topic long dominated by legal scholars, economists, and sociologists. Drezner bravely offers a big-picture account of global regulation that is analytical and focused on a few fundamental questions. This is stimulating and original research on a very timely global issue. It is the sort of book I have long been looking for."—Walter Mattli, St. John's College, University of Oxford

"Daniel Drezner's All Politics Is Global is original, compelling, and written with dazzling clarity. The controversies Drezner addresses push forward theoretical and policy debates that are vitally important. The conceptual and empirical core of the book is first-rate, the evidence and arguments of his case studies are fascinating, and the book fills an obvious gap in the literature."—Louis Pauly, University of Toronto