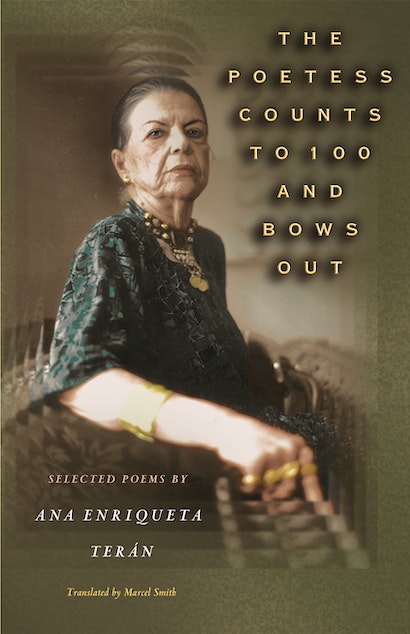 Ana Enriqueta Terán is arguably Venezuela’s finest poet. Celebrated throughout the Spanish-speaking world, she is almost unknown among anglophones. Until now only a handful of her poems have been translated into English, giving at best a diluted impression of a uniquely intense imagination.


This bilingual edition reveals the power and beauty of this poet’s Spanish poems through English versions of corresponding force. It invites readers to enter Terán’s world — a world at once strongly Venezuelan and universally human, imbued with great beauty, sardonic humor, pitiless compassion, lucid wisdom, and joyful affirmation.


Selected from several volumes of Terán’s work, these poems span half a century of composition and show an extraordinary range in both form and substance. Some are written in closed forms, some in free verse. Some are carefully evocative representations of the landscapes and cityscapes that have nourished the poet’s intelligence and imagination. Others are dramatic character studies. All are infused with Terán’s rare sensibility and realized through language that manages to be at once graceful, urgent, and explosive. This volume is a treasure for all lovers of poetry.


How much sweetness to make right the night
and this clutch of anemones
near thin smooth consoling stones,
stones havens of southern weather.
Of a woman who watches Cepheids quaver
among lightbursting mangroves.
Of a woman who offers cats-eyes and clematis
only, Islands, for the sake of setting right
her deal struck with happiness.

Ana Enriqueta Terán is one of Venezuela's best-known poets and has published more than a dozen books of poetry. She was named Doctora Honoris Causa by the University of Carabobo and, in 1989, was awarded her country's highest literary honor, the Premio Nacional de Literatura. Now in her eighties, she is writing her autobiography to be published only after her death. Marcel Smith is Professor of English Emeritus at the University of Alabama. He has published translations of Spanish poems in a number of journals. This is his first book.

"The Poetess Counts to 100 and Bows Out . . . is a demanding selection of poems interweaving fables, myths, dreams, bold similes, and heightened visions of reality in order to interpret and commemorate what often nonetheless seem to be personal experiences. It is a sometimes puzzling yet also singularly sensual and resonant mixture, especially in the many cases where poems exhibit a semantically rich, philosophically ambitious, extremely compact lyricism."—John Taylor, Antioch Review

"In this attractive anthology, Terán discloses a powerful and grand spirit, whether addressing her mother, her eagle, her rivers, or her dead brother; the idiom varies from the freedoms of early modernism to formal sonnets to the 'old woman's toys' of her final tercets, but the feelings are always dense with loved objects and local solicitude."—Richard Howard

"Above all, the poetry of Ana Enriqueta Terán transmits movement and contrasting sound patterns. In his dynamic and often inspired translations, Marcel Smith recovers for us the sprung rhythms and eccentric visual shifts in Terán's poetry. Smith has taken the risky step of translating and transforming to capture an extraordinarily complex and dense poetry, one with few equivalents even in Spanish."—Gwen Kirkpatrick, University of California, Berkeley