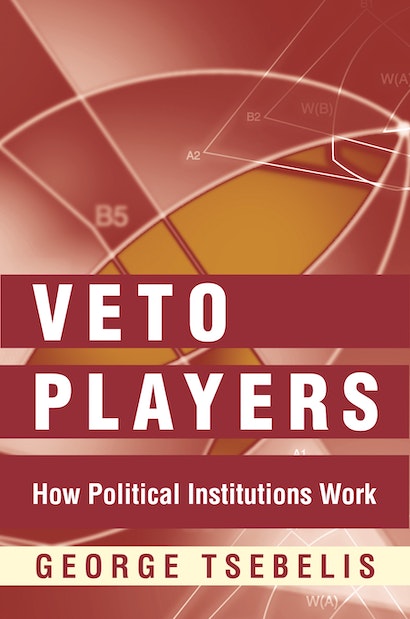 Political scientists have long classified systems of government as parliamentary or presidential, two-party or multiparty, and so on. But such distinctions often fail to provide useful insights. For example, how are we to compare the United States, a presidential bicameral regime with two weak parties, to Denmark, a parliamentary unicameral regime with many strong parties? Veto Players advances an important, new understanding of how governments are structured. The real distinctions between political systems, contends George Tsebelis, are to be found in the extent to which they afford political actors veto power over policy choices. Drawing richly on game theory, he develops a scheme by which governments can thus be classified. He shows why an increase in the number of “veto players,” or an increase in their ideological distance from each other, increases policy stability, impeding significant departures from the status quo.


Policy stability affects a series of other key characteristics of polities, argues the author. For example, it leads to high judicial and bureaucratic independence, as well as high government instability (in parliamentary systems). The propositions derived from the theoretical framework Tsebelis develops in the first part of the book are tested in the second part with various data sets from advanced industrialized countries, as well as analysis of legislation in the European Union. Representing the first consistent and consequential theory of comparative politics, Veto Players will be welcomed by students and scholars as a defining text of the discipline.

From the preface to the Italian edition:
?

“Tsebelis has produced what is today the most original theory for the understanding of the dynamics of contemporary regimes… . This book promises to remain a lasting contribution to political analysis.” — Gianfranco Pasquino, Professor of Political Science, University of Bologna

George Tsebelis is Professor of Political Science at the University of California, Los Angeles. He is the author of Nested Games: Rational Choice in Comparative Politics and coauthor of Bicameralism. The recipient of a Guggenheim Fellowship, a Hoover National Fellowship, and a Russell Sage Fellowship, he has published numerous papers on the institutions of the European Union and on comparative institutional analysis.

"This is a big book and an important one. It completes a program on which George Tsebelis has been working for ten years or more. With luck, it may revolutionize the systematic study of comparative government."—Iain McLean, Journal of Legislative Studies

"This book will be a landmark. It is the culmination of a decade of hard analytical and empirical work through which Tsebelis has single-handedly transformed comparative government. In spite of its analytical precision, the writing is highly accessible. It is safe to predict that this will be among the most influential political science texts of the coming decade."—Fritz W. Scharpf, Director of the Max Planck Institute for the Study of Societies, Cologne

"Veto Players ranks as the most important theoretical argument to emerge in comparative politics over the last 10-15 years. Tsebelis elegantly lays out a set of simple but rigorous concepts tied to the legislative process. These concepts and their underlying dynamics link regimes, party systems, and federalism to policy outcomes in provocative and profound ways. Veto Players has changed and is likely to continue to change our fundamental understanding of institutional politics."—Barry Ames, University of Pittsburgh

"Veto Players is an excellent book that is likely to be recognized as a seminal contribution to the study of political institutions. It will find its way onto reading lists in just about every self-respecting institution in the United States and many abroad. Tsebelis covers an amazing range of institutions. His book is cogent in its style, parsimonious in its argument, and sweeping in its scope."—Kaare Strom, University of California, San Diego

"Tsebelis shows that the concept of a 'veto' player can provide a great deal of leverage for analyzing apparently very diverse institutional structures. The book is a major advance theoretically and methodologically and should have the effect of using theory to break down artificial boundaries between the subfields of Comparative Politics, International Relations, and American politics."—John Ferejohn, Carolyn Munro Professor, Stanford University

From the preface to the Italian edition: "Tsebelis has produced what is today the most original theory for the understanding of the dynamics of contemporary regimes. . . This book promises to remain a lasting contribution to political analysis."—Gianfranco Pasquino, Professor of Political Science, University of Bologna