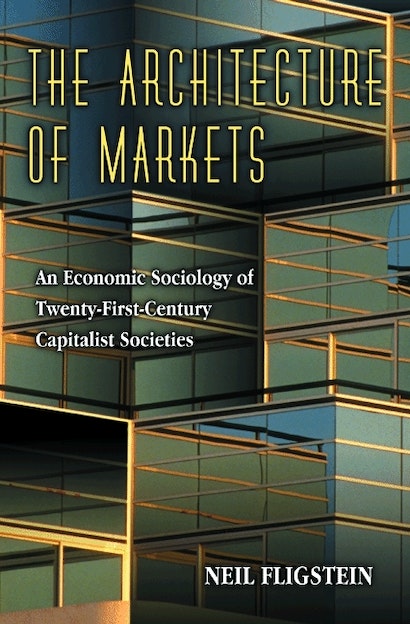 Market societies have created more wealth, and more opportunities for more people, than any other system of social organization in history. Yet we still have a rudimentary understanding of how markets themselves are social constructions that require extensive institutional support. This groundbreaking work seeks to fill this gap, to make sense of modern capitalism by developing a sociological theory of market institutions. Addressing the unruly dynamism that capitalism brings with it, leading sociologist Neil Fligstein argues that the basic drift of any one market and its actors, even allowing for competition, is toward stabilization.

The Architecture of Markets represents a major and timely step beyond recent, largely empirical studies that oppose the neoclassical model of perfect competition but provide sparse theory toward a coherent economic sociology. Fligstein offers this theory. With it he interprets not just globalization and the information economy, but developments more specific to American capitalism in the past two decades — among them, the 1980s merger movement. He makes new inroads into the ”theory of fields,” which links the formation of markets and firms to the problems of stability. His political-cultural approach explains why governments remain crucial to markets and why so many national variations of capitalism endure. States help make stable markets possible by, for example, establishing the rule of law and adjudicating the class struggle. State-building and market-building go hand in hand.


Fligstein shows that market actors depend mightily upon governments and the members of society for the social conditions that produce wealth. He demonstrates that systems favoring more social justice and redistribution can yield stable markets and economic growth as readily as less egalitarian systems. This book will surely join the classics on capitalism. Economists, sociologists, policymakers, and all those interested in what makes markets function as they do will read it for many years to come.

Neil Fligstein is Professor of Sociology and Class of 1939 Chancellor's Professor at the University of California, Berkeley. He is the author of The Transformation of Corporate Control.

"Until the appearance of Fligstein's new book . . . no one has attempted to integrate economic sociology into a coherent, consistent, and comprehensive approach for the study of market capitalism. This book, therefore, sets a standard for other books that will follow in the coming decades. By all measures, it is an impressive book that deserves careful reading by everyone interested in the analysis of capitalist economies."—Gary G. Hamilton, American Journal of Sociology

"This is an important book. It . . . will undoubtedly redirect research attention and encourage new work on the rules and politics that structure market relations. This book pushes us forward and suggests a rich vein waiting to be mined."—Mitchel Y. Abolafia, Administrative Science Quarterly

"The Architecture of Markets is superb. It is timely in setting an agenda and a framing for a new and newly coherent economic sociology. The writing is lucid, the assessments are penetrating and judicious, open-minded with respect to other disciplines and perspectives, yet hard-hitting on the major points."—Harrison White, Columbia University

"Neil Fligstein has produced a major and innovative contribution to economic sociology; he has created an exciting theory about how markets will behave, and this theory will no doubt be discussed quite a bit in the coming years. This book represents the first attempt in contemporary economic sociology to produce a full . . . analysis of the economy."—Richard Swedberg, Stockholm University