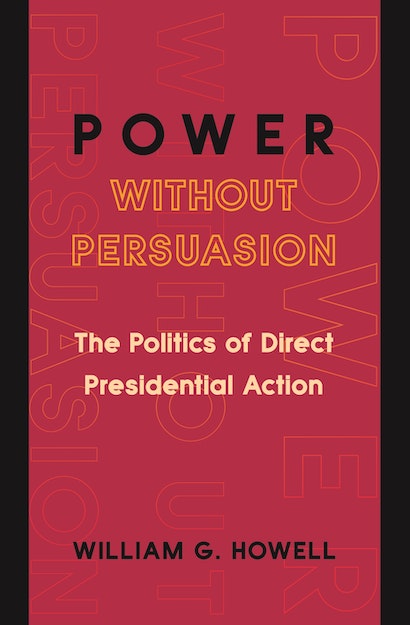 Since the early 1960s, scholarly thinking on the power of U.S. presidents has rested on these words: “Presidential power is the power to persuade.” Power, in this formulation, is strictly about bargaining and convincing other political actors to do things the president cannot accomplish alone. Power without Persuasion argues otherwise. Focusing on presidents’ ability to act unilaterally, William Howell provides the most theoretically substantial and far-reaching reevaluation of presidential power in many years. He argues that presidents regularly set public policies over vocal objections by Congress, interest groups, and the bureaucracy.


Throughout U.S. history, going back to the Louisiana Purchase and the Emancipation Proclamation, presidents have set landmark policies on their own. More recently, Roosevelt interned Japanese Americans during World War II, Kennedy established the Peace Corps, Johnson got affirmative action underway, Reagan greatly expanded the president’s powers of regulatory review, and Clinton extended protections to millions of acres of public lands. Since September 11, Bush has created a new cabinet post and constructed a parallel judicial system to try suspected terrorists.


Howell not only presents numerous new empirical findings but goes well beyond the theoretical scope of previous studies. Drawing richly on game theory and the new institutionalism, he examines the political conditions under which presidents can change policy without congressional or judicial consent. Clearly written, Power without Persuasion asserts a compelling new formulation of presidential power, one whose implications will resound.

"This must read shows the civics text version of the US system turned upside down."—Choice

"This book is at once important and readable! Howell takes a long step beyond the modern literature that stresses the Presidency and legislation. He focuses instead upon initiatives a President can take with relative freedom from Congress and customary deference from courts; namely, executive orders: what? when? why? (also: why not?). Howell's model-building and discussions of his findings with its aid are themselves models of incisive analysis."—Richard E. Neustadt, Harvard University, author of Preparing to be President

"William Howell persuasively demonstrates that policymaking in the United States cannot be studied within a single institutional arena in isolation. In this innovative study, he draws on theories of executive-legislative and executive-judicial relations to build a model of presidential unilateral action and tests his claims on impressive original datasets. While few will agree with all of Howell's arguments, his book will likely set both an agenda and a standard for future studies of policymaking and the separation of powers."—Nolan McCarty, Princeton University

"This is one of the best books on the presidency in recent years. The theory is clear and sensible, the data superb, and the case studies on-point and fascinating. It is also a pleasure to read."—Charles Cameron, Columbia University, author of Veto Bargaining

"Power without Persuasion will be an enormously influential book on the presidency and American political institutions. It promises to change scholars' thinking about presidential policymaking and, in doing so, become a catalyst for future work. The rigor of the analysis is high, and the writing and presentation are clear. The book will be widely assigned to students."—Brandice Canes-Wrone, Northwestern University